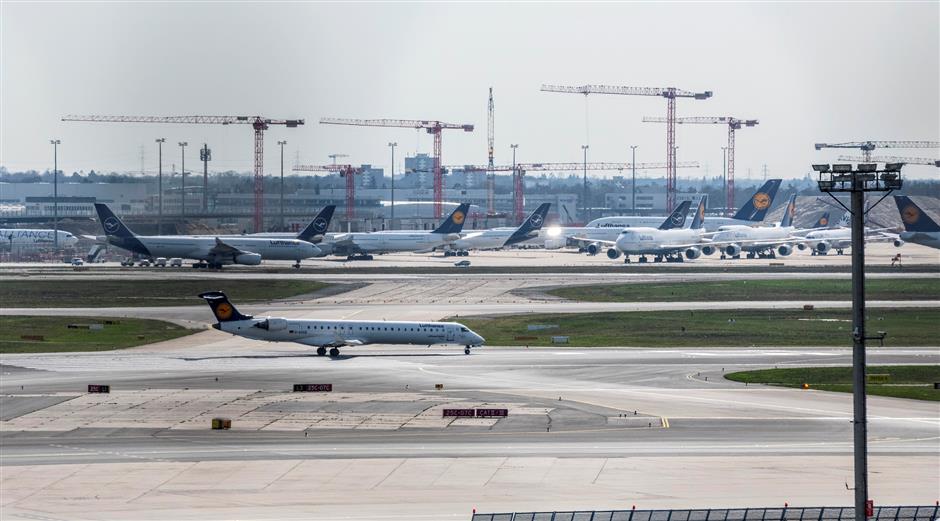 A Lufthansa plane is landing in a front of parking planes from Staralliance and Lufthansa at the airport of Frankfurt am Main, western Germany, on March 16, 2020.

Major world airlines on Monday announced further deep cuts to service as the worsening coronavirus crisis ravages demand, accentuating talk of government support with US carriers formally releasing a plea for a bailout of some US$50 billion.

Citing an "unprecedented" drop in demand that is "getting worse by the day" and "much worse than 9/11," the trade group Airlines for America (A4A) unveiled a wish list including grants, loans and tax relief.

"This is a today problem, not a tomorrow problem. It requires urgent action," said A4A President and Chief Executive Nicholas Calio.

"As of the morning of March 16, the pessimistic scenario is looking most likely," the group said.

White House officials have highlighted airlines as a major concern and signaled broad support for a federal plan to fortify the industry.

"We have to back the airlines," US President Donald Trump said at a briefing. "It's not their fault. In fact, they were having a record season."

Earlier, European carriers announced additional cutbacks in service due to the crisis.

IAG, owner of British Airways and Spanish carrier Iberia, announced it would slash flight capacity by 75 percent during April and May owing to the COVID-19 outbreak, while Germany's Lufthansa said it would trim seating capacity on long-haul flights by up to 90 percent, affecting mainly routes to Africa, the Middle East and South America.

Britain's Virgin Atlantic added that it has decided to park 75 percent of its total fleet, and in April this will rise as high as 85 percent.

Shares of European carriers and most US airlines experienced another bruising session as the economic toll of the coronavirus becomes clearer.

"Last week saw a rapid acceleration of the impact of COVID-19 on global aviation and tourism," Virgin Atlantic warned in a statement.

"The situation is deteriorating at pace and the airline has seen several days of negative bookings, driven by a huge volume of cancellations as customers choose to stay at home."

British no-frills carrier EasyJet warned it may have to ground "the majority" of its fleet, urging governments across Europe to help their airlines maintain access to liquidity.

The airline's CEO Johan Lundgren said "European aviation faces a precarious future," and called for government backing if the industry is to survive.

Irish budget carrier Ryanair meanwhile did not rule out a full grounding as it unveiled stinging flight cutbacks.

IAG said it was taking measures including cuts to non-essential spending, a freeze on recruitment and reducing work hours.

A management shake-up had also been put on hold, noting that Willie Walsh, who was due to step down on March 26, would remain as IAG's chief executive.

Air France will meanwhile slash flight capacity by 70-90 percent over the next two months, while Austrian Airlines will suspend all flights from Thursday, and Finnair is cutting 90 percent of capacity until the situation improves.

The German government on Monday said it is planning to shield companies from going under because of the pandemic, by suspending legal obligations for firms facing acute liquidity problems to file for bankruptcy.

German tourism and hotel group TUI said it was applying for state aid to keep it afloat, as it suspended the "majority" of its operations.

Back in London, a spokesman for British Prime Minister Boris Johnson signaled that the government would examine help for affected businesses, not just airlines, via tax authority Her Majesty's Revenue and Customs.

"HMRC is ready to help all businesses including airlines experiencing temporary financial difficulties due to coronavirus," Johnson's spokesman told AFP.

As G7 finance ministers prepare to discuss the crisis later on Monday, Innes argued that airlines were not the only strategic companies calling for assistance this time.

"This is not 2008. Back then it was the banks, this time the banks' balance sheets are fine," Innes said. "But this is a global economic crisis which needs swap lines to airline companies, oil companies and retailers."

"Airlines might be at the top of the list for directed fiscal help, but virtually every global industry is facing pressure without a government bailout," he added.