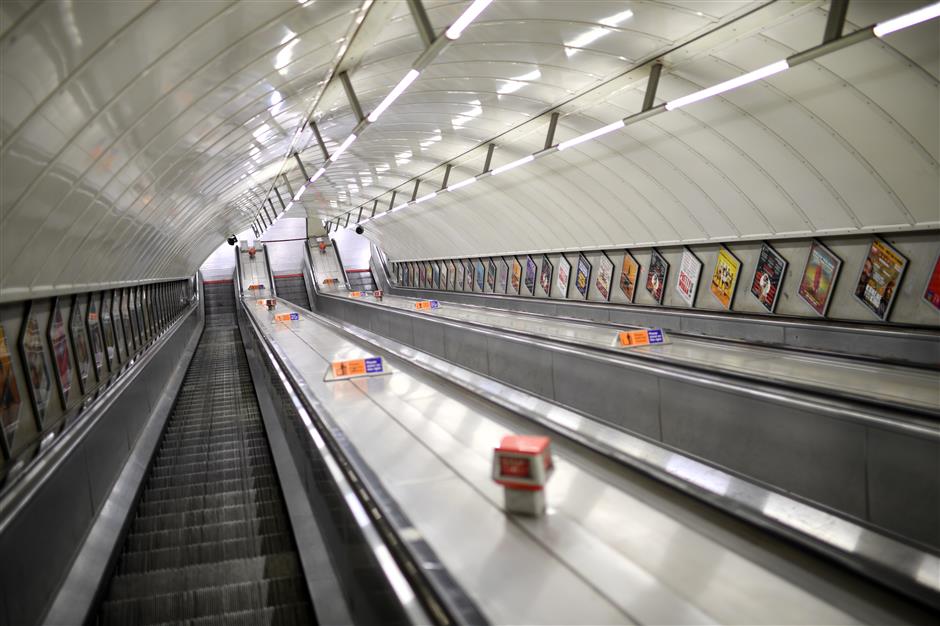 Britain on Monday ordered a three-week lockdown to tackle the spread of coronavirus, shutting "non-essential" shops and services, and banning gatherings of more than two people.

"Stay at home," Prime Minister Boris Johnson said in a televised address to the nation, as he unveiled unprecedented peacetime measures after the country's death toll climbed to 335.

The announcement came after outrage in government that recommendations about reducing social contact to minimize close-contact transmission of the virus were being ignored.

Crowds of people were seen enjoying weekend spring sunshine in parks and countryside across the country, prompting calls for tougher action to be imposed.

"From this evening (Monday) I must give the British people a very simple instruction — you must stay at home," Johnson said.

"Because the critical thing we must do is stop the disease spreading between households."

Under the new measures, Johnson said going out to shop for basic necessities was still allowed, as was exercise, medical needs, and travel to and from work.

But shops selling items such as clothes or electronics as well as libraries, playgrounds and places of worship would be shut, with the ban also extending to weddings and baptisms but not funerals.

Parks will remain open but Johnson warned: "If you don't follow the rules the police will have the powers to enforce them, including through fines and dispersing gatherings."

He called the pandemic "the biggest threat this country has faced for decades" and said the already overstretched state-run National Health Service would be unable to cope if the pace of transmission continues.

"I urge you at this moment of national emergency to stay at home, protect our NHS and save lives," he said.

The restrictions will be "under constant review," he added.

"We will look again in three weeks, and relax them if the evidence shows we are able to," he said.

"But at present there are just no easy options. The way ahead is hard, and it is still true that many lives will sadly be lost."

Britain recorded its first death in the outbreak on March 5 but has been criticized for its light-touch approach to containing the spread compared to more stringent measures elsewhere.

Latest figures show Britain now has 6,650 confirmed cases of COVID-19, with warnings the virus is taking hold quicker than in Italy at the same point.

Italy has suffered the most coronavirus deaths worldwide, with 6,077 fatalities out of 63,927 declared infections.

Johnson had previously resisted mounting public concern that hand-washing was not enough to reduce the impact of COVID-19.

As the numbers of cases and deaths climbed, employees were laid off, and sporting and other events canceled, he moved to try to limit the social and economic fall-out.

The Bank of England slashed interest rates to record lows, while Finance Minister Rishi Sunak unveiled a series of multi-billion-pound packages to help those affected.

Notably, the government has stepped in to back up employee wages up to 80 percent, give tax holidays to businesses and boost welfare payments.

But Johnson was forced to go further, and put the government on what he said was a war footing, after dire warnings from scientists that its social distancing strategy was not working.

The government's chief scientific adviser has said it was a "reasonable" estimate that 55,000 people now have the virus in Britain.