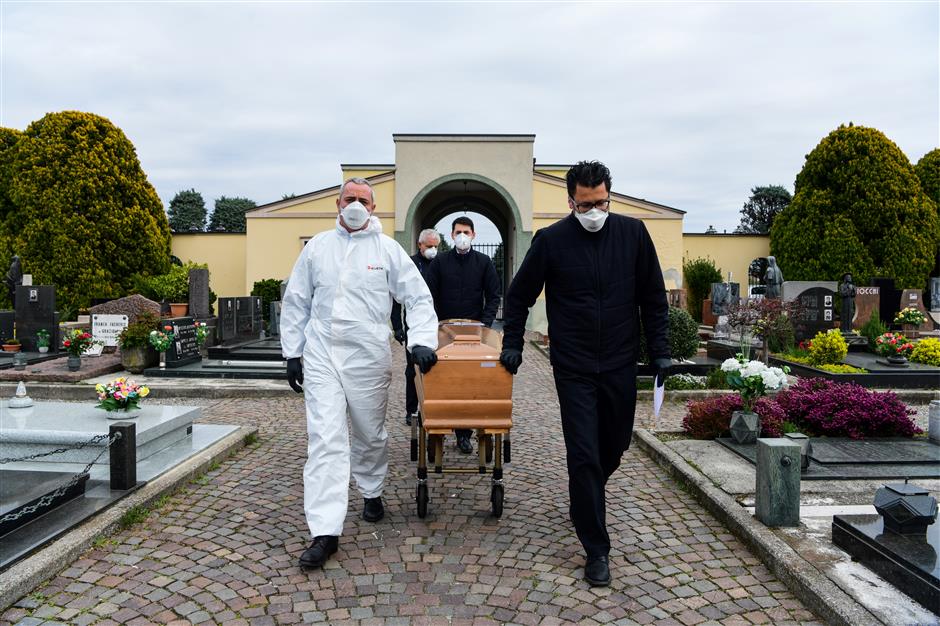 Pallbearers pull the coffin of a deceased person for a funeral ceremony into the cemetery of Grassobbio, Lombardy, on March 23, 2020, in the absence of quarantined relatives.

A total of 63,927 coronavirus cases have been assessed in Italy since the pandemic broke out in its northern regions on February 21, the Civil Protection Department managing the COVID-19 emergency said on Monday.

The number of total infections grew by 4,789, or 8 percent from 59,138 cases recorded on Sunday. Further 601 fatalities were also registered on Monday, with the death toll reaching 6,077. The daily fatality figure dropped from Sunday's 651 and Saturday's 793.

Although still upward, the figures showed the daily rise in both the number of people testing positive and the number of deaths has been less marked for the second day in a row, Civil Protection Chief Angelo Borrelli told a press conference late Monday afternoon.

Health authorities, however, warned that it was still too early to confirm a decreasing trend in the ongoing pandemic.

"The more we have consecutive (downward) measurements, the more confident we can be," Silvio Brusaferro, president of Italy's National Health Institute (ISS), said at the press conference alongside Borrelli.

"I am looking carefully and favorably at such numbers, but I do not want yet to commit myself to saying whether this is a trend or not," he stressed, adding that this week would be crucial for evaluating the trends.

As in the previous days, the ISS chief also warned that a crucial goal for national authorities and the health system remain to be avoiding the dynamics of strong circulation of the virus seen in the northern regions "reproduced in the South."

"Of the 50,418 people who are positive, some 26,522 are currently under home isolation — being asymptomatic or with light symptoms — another 3,204 are in intensive care, and all the other hospitalized in ordinary wards," he specified.

Borrelli also said that Italy was benefiting from the solidarity of several countries in its fight against the COVID-19, and especially thanked "the Russian Federation, the People's Republic of China, France, and Germany, all of which have provided us with additional staff and means against the epidemic."

Among countries that have sent medical materials and experts were also Cuba and Venezuela.

"We count 28,761 positive people today, with a daily increase of 1,555 cases, while the previous daily rise in infections was of 1,691," Lombardy's Welfare Councillor Giulio Gallera told a press conference broadcast live on social media and TV networks from Milan.

"Another beautiful signal concerns the number of COVID-19 patients hospitalized (in ordinary wards), which is now 9,266, against 9,439 in the previous day ... it is the first time," Gallera stressed.

Echoing the warning from Brusaferro, Gallera said it was still too early to claim the pandemic was really slowing down, and he strongly appealed to people to keep respecting all restrictions implemented since a national lockdown went into effect on March 10.

"The agency's Secretary General told me that -- following a first analysis of available data on Avigan, the (AIFA) technical-scientific committee is developing a testing and research program to assess the impact of the drug in the initial phases of the disease," Ansa news agency quoted the minister as saying.