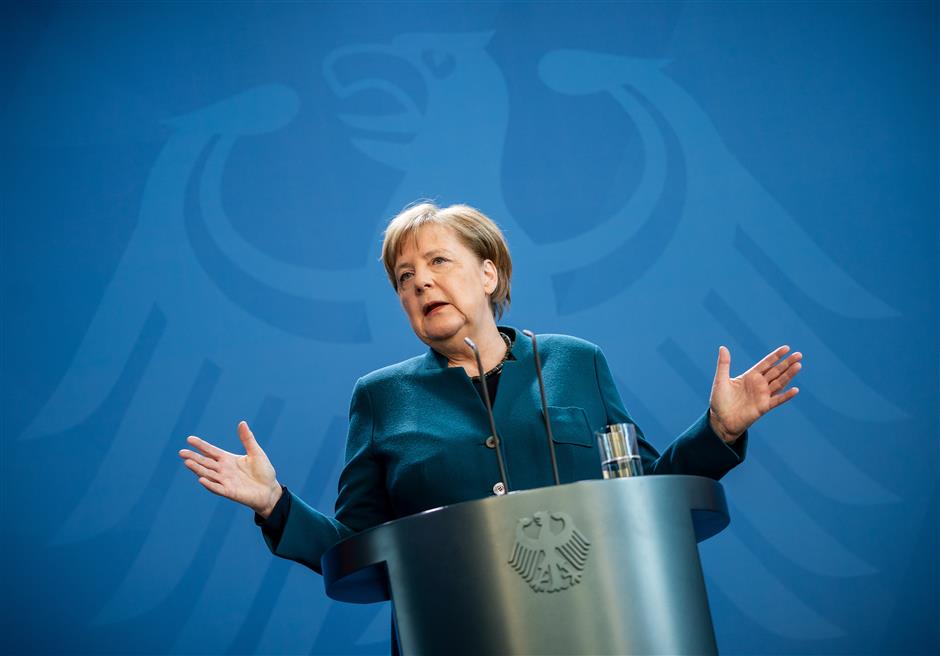 German Chancellor Angela Merkel makes a press statement on the spread of the new coronavirus COVID-19 at the Chancellery, in Berlin on March 22, 2020.

Angela Merkel is "doing well" in self-imposed quarantine and awaiting further coronavirus testing after a first result came back negative, her spokesman said on Monday.

The veteran leader decided to self-isolate as a precaution after learning on Sunday that a doctor who vaccinated her last Friday was infected with the novel coronavirus.

He had earlier told reporters in the capital that Merkel "is doing well and working from home."

Further tests will follow in the coming days, Seibert explained, since the initial test at such an early stage may not be conclusive.

In the meantime, the chancellor is getting on with the job from the comfort of her Berlin flat.

The 65-year-old dialled into a Monday morning Cabinet meeting that clinched a major rescue package for virus-stricken companies and employees in Europe's top economy.

Seibert thanked everyone on Merkel's behalf for "the many, many well wishes and messages for the chancellor to stay healthy."

The spokesman declined to say whether Merkel's chemistry professor husband Joachim Sauer was quarantining with her, saying he would not share information about family members.

Asked if he himself, as a close Merkel staffer, should self-isolate, Seibert said he last met with the chancellor on Sunday afternoon but had stuck to the advice of keeping a safe physical distance from people.

News that Merkel was going into quarantine came shortly after she gave a press conference in Berlin where she showed no symptoms of ill health.

She used the press conference to announce fresh curbs on social interactions to contain a pandemic that has infected over 22,600 people in Germany and killed 86.

The latest measures include a ban on gatherings of more than two people, on top of last week's closures of schools, non-essential shops, bars and restaurants.

The head of the Germany's Robert Koch Institute for disease control, Lothar Wieler, on Monday said he was "optimistic" that the restrictions were paying off, noting that the outbreak's "exponential growth curve had started to flatten a bit."

He expected to have a clearer view of the trend by Wednesday.