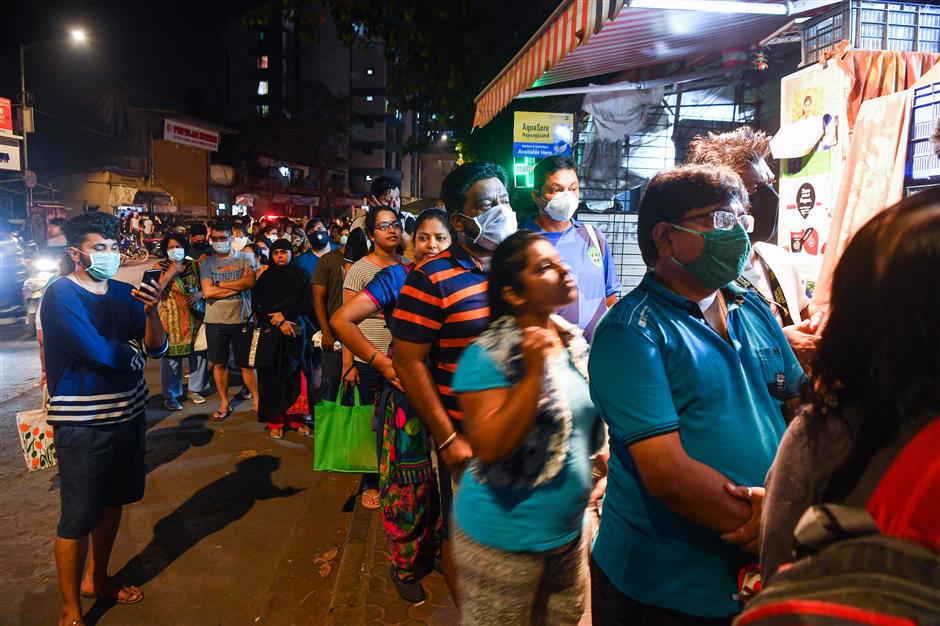 People line up outside a store to buy groceries following Indian Prime Minister's announcement of a government-imposed nationwide lockdown as a preventive measure against the COVID-19 coronavirus in Mumbai on March 24, 2020.

"From 12 midnight today (6:30pm GMT on Tuesday), the entire country will be in lockdown, total lockdown," Modi said in a national television address to the world's second most-populous nation.

"To save India, to save its every citizen, you, your family... every street, every neighborhood is being put under lockdown."

India has lagged behind other nations in the number of COVID-19 cases, but there has been a sharp increase in recent days to 519 infections, including 10 deaths, according to the government.

A raft of lockdown measures had already been brought in by individual states and territories — including sealing borders and restricting movement to only essential services — in a bid to prevent an explosion of cases that could overwhelm the fragile public health system.

Modi warned that Indians had to observe the lockdown if they wanted to stop the spread of the deadly virus.

"This is a curfew... We will have to pay economic cost of this, but to save every family member, this is the responsibility of everyone — the biggest priority," the prime minister added.

"If these 21 days are not managed, the country and your family will go back 21 years... I am not saying this as your prime minister, I am saying it as your fellow citizen, family member."

Under the order, people could face up to two years in jail and an unspecified financial penalty if they flout the rules.

In India's capital New Delhi, some people in their pyjamas ran toward nearby shops despite heavy rain to stock up, while in the financial capital Mumbai, long lines of masked people formed outside pharmacies and supermarkets.

Following his speech, Modi tweeted: "THERE IS ABSOLUTELY NO NEED TO PANIC."

"Essential commodities, medicines etc would be available. Center and various state governments will work in close coordination to ensure this," he added.

Local media reported that state leaders would announce the timings of when people could buy essential items.

"This lockdown is needed," virologist Shahid Jameel of biomedical research charity Wellcome Trust/DBT India Alliance told AFP after the announcement. "If this is not done now we would be looking at six to eight weeks later, with many more deaths."

"But it's going to be very hard on the poor and vulnerable. I hope there is a plan in place. The devil is always in the details," he added.

All social, political, sports, entertainment, academic, cultural and religious gatherings would be banned, the order said.

All transport services including air, rail and road, would be suspended. A maximum of 20 people would be allowed to attend a funeral.

People working in essential services such as hospitals, police and media were exempted from the stay-at-home order, authorities added.

E-commerce giant Amazon, which has a big presence in India, said in a statement on its website that it would only sell "high priority" products to customers.