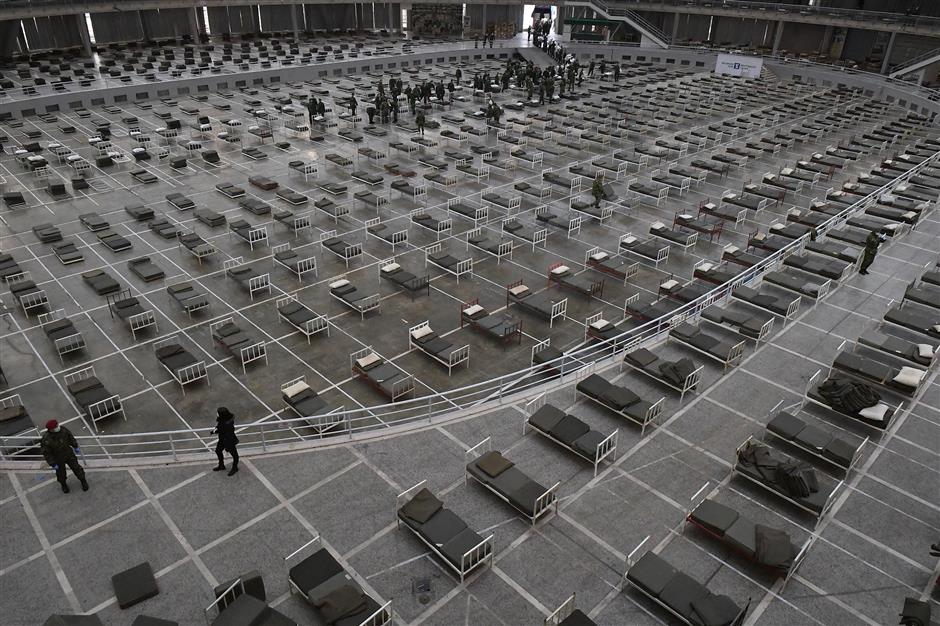 Soldiers work to turn an exhibition center to a makeshift hospital for novel coronavirus patients in Belgrad, Serbia, on March 24, 2020.

Stringent early measures could enable countries like Serbia to stem the spread of COVID-19, said Peng Zhiqiang, chief of the Chinese medical team in the country, on Wednesday.

Peng made the remarks three days after the six-expert medical squad arrived from Guangdong, southern China, where the pandemic is already under control.

Peng, deputy director of the Institute of Infectious Disease Prevention and Control of Guangdong Provincial Center for Disease Control and Prevention, said that the dusk-to-dawn curfew currently imposed across Serbia has achieved good results in reducing the mobility and gathering of people, which is essential to slow down the virus spread.

As of Wednesday, 384 cases have been reported in Serbia, with 203 being treated in hospital. The Serbian government, following medical experts' advice, has announced that all the people with symptoms will undergo a test for the virus and those who are tested positive will be hospitalized.

With regard to measures of wider tests, Peng explained that a number of infections could slip away unnoticed if tests are inadequate as the virus can leave invisible symptoms with a person who is however highly infectious.

The Balkan country's decisive measures such as shutdown of the borders and hospitalization of all confirmed cases are praised by the Chinese expert.

"If their symptoms become heavier, they can be treated immediately," he said.

Peng said he was impressed by the temporary hospital with 3,000 beds assembled by Serbian army at Belgrade Fair in the Serbian capital, a similar move that proved effective in the central Chinese city of Wuhan.

The Chinese medical team, comprised of epidemiologists, pulmonologists, specialists in emergency medicine as well as one clinical psychologist, is working to a very tight daily schedule, which includes routine activities such as visiting hospitals and laboratories, and holding seminars with officials and doctors.

"We will be happy to see the practice in China leading to success in a country with a different management system," said Peng.