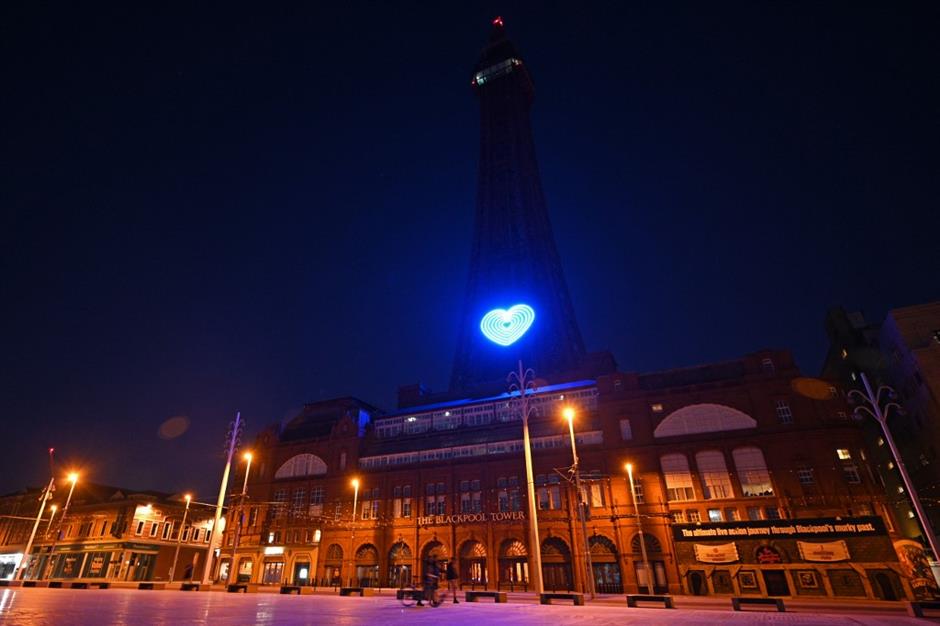 A blue heart is lit up on the tower in Blackpool, north-west England, on March 26, 2020, as a sign of public admiration for the National Health Service.

The British government said on Thursday that the number of confirmed COVID-19 cases in the country has risen to 11,658 as single-day deaths topped 100 for the first time since the outbreak of the disease.

The British Department of Health and Social Care said a total of 115 people had died of COVID-19 in 24 hours, bringing the tally to 578. The number of confirmed cases registered an increase of 2,129 on Thursday from 9,529 on Wednesday.

The latest official figures came at a time when global coronavirus infection cases surpassed half a million.

The Department of Health said that it had changed the way it reported coronavirus deaths.

British Prime Minister Boris Johnson is facing mounting pressure to speed up the rollout of coronavirus tests for the public and frontline health workers as concern intensifies that a lack of diagnostics is impeding efforts to contain the epidemic.

The British government is racing to ramp up its response to the pandemic. The British National Health Service (NHS) is seeking thousands of extra staff among health workers recently retired, while a military field hospital with 4,000 beds is being installed in east London.

The prime minister said on Wednesday that 405,000 people had responded in just 24 hours to a call for volunteers to support the NHS and vulnerable people, significantly more than the 250,000 initially sought.

The public has been urged to take part in a mass round of applause on Thursday night to commend the NHS staff and carers for their work amid the coronavirus outbreak.

The "clap for our carers" campaign is set to take place at 8pm GMT on Thursday from the country's doorsteps, windows, gardens and balconies.

Organisers of the initiative have planned a round of applause in a show of appreciation to doctors, nurses and all other people involved in tackling the spread of COVID-19.