US tops world in virus cases and logs record unemployment 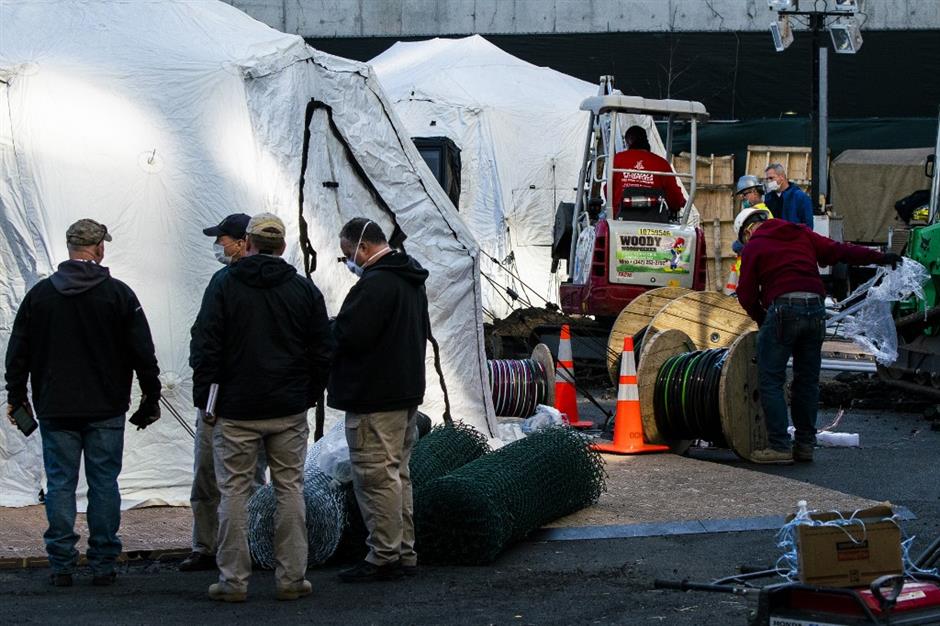 Workers build a makeshift morgue outside of Bellevue Hospital due to the coronavirus outbreak on March 26, 2020 in New York City. Across the country schools, businesses and places of work have either been shut down or are restricting hours of operation as health officials try to slow the spread of COVID-19.

The United States now has more COVID-19 infections than any other country, and a record number of newly unemployed people, as the coronavirus crisis deepens around the world.

Hours after his nation reached the grim milestone, President Donald Trump spoke by phone to China's Xi Jinping, after weeks of bickering and finger pointing over a disease researchers say could kill at least 1.8 million people by the end of the year.

"China has been through much & has developed a strong understanding of the Virus. We are working closely together. Much respect!"

The warm words — which were not quite echoed in the Chinese state media readout of the call — came after a few weeks in which the White House had repeatedly referred to "the Chinese coronavirus", angering Beijing.

China, which appears to have got on top of its own outbreak, readied to bar entry to foreigners as it frets over a surge in imported cases, illustrating the difficulty of containing a virus in an interconnected world.

Wuhan, the city where the illness first emerged late last year, was — from midnight — to ease severe movement restrictions in place for two months.

That initial lockdown has now been aped around the world, with three billion people told to stay indoors.

Healthcare systems in even the most developed nations are being stretched to breaking point with dire warnings they could soon be overwhelmed.

More than 530,000 people globally have been sickened by the disease.

A tally by Johns Hopkins University showed that by around 0900 GMT Friday, there were almost 86,000 known infections in the US. That figure is higher than both China and hard-hit Italy, which accounts for a third of the 24,000 deaths worldwide.

Even with lockdowns implemented around the world, researchers at Imperial College London said Thursday the global death toll could be staggering.

Their model shows 1.86 million people could die, with nearly 470 million infected this year.

Failure to act swiftly in imposing lockdowns and strict social distancing could make those numbers far higher, they warned.

"Our analysis highlights the challenging decisions faced by all governments in the coming weeks and months, but demonstrates the extent to which rapid, decisive and collective action now could save millions of lives," the researchers said.

As fears mount over a global recession that could even dwarf the Great Depression of the 1930s, leaders from the Group of 20 major economies held crisis talks by video link on Thursday.

They pledged a "united front" to fight the outbreak — along with an enormous financial rescue package.

"The virus respects no borders," the leaders said in a statement.

"We are injecting over $5 trillion into the global economy, as part of targeted fiscal policy, economic measures, and guarantee schemes to counteract the social, economic and financial impacts of the pandemic."

They also pledged "robust" support for developing nations, where experts fear the coronavirus could wreak havoc.

Medical systems in even the most developed nations are straining under the weight of new patients.

In New York, where tens of thousands are ill, Governor Andrew Cuomo warned there were simply not enough hospital beds.

"Almost any scenario that is realistic will overwhelm the capacity of the current healthcare system," he said.

For those fighting on the frontlines, the pressure was showing.

"To watch somebody in their thirties die, it's hard," said one respiratory therapist in the city who requested anonymity. "You can't have visitors. They're in the room by themselves on a ventilator. It's very depressing."

In Europe, medics were already having to make choices.

"If I've got five patients and only one bed, I have to choose who gets it," Sara Chinchilla, a pediatrician at a hospital near Madrid, told AFP.

"People are dying who could be saved but there's no space in intensive care."

The pandemic has already become catastrophic for the global economy.

In the United States, the world's largest economy, the Labor Department reported that 3.3 million people applied for unemployment benefits last week — by far the highest number ever recorded.

Job losses have swept across sectors from food services to retail to transportation, as nearly half of the country has closed non-essential businesses.

"It is staggering. We are only seeing the initial numbers; they will get worse, unfortunately," New York Mayor Bill de Blasio told reporters, estimating that half a million people in the city would lose work.

Stock markets remained volatile, with Asian bourses in the green Friday after a third straight day of rises on Wall Street, while Europe started the day down.

Traders have taken heart from the passage through the Senate of a US$2 trillion stimulus bill — the largest in US history, which will support American businesses and provide cash payouts averaging US$3,400 for a family of four.

The bill goes before the House of Representatives on Friday.