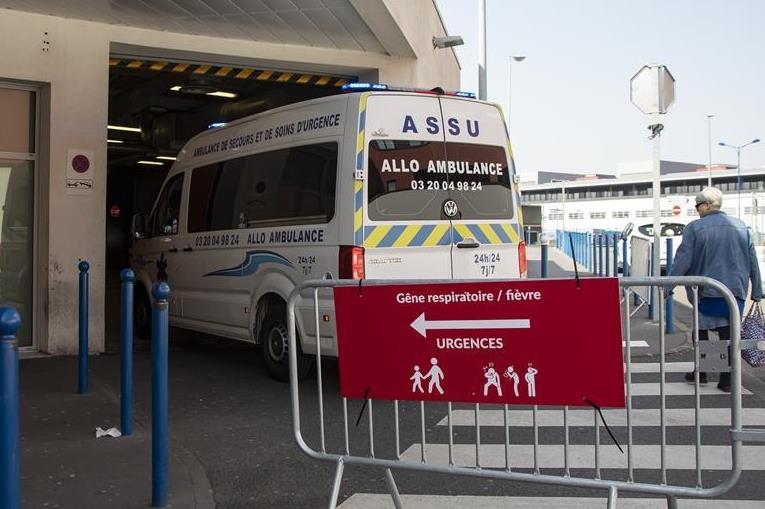 An ambulance arrives at Roger Salengro Hospital in Lille, northern France, on March 27, 2020.

The number of confirmed coronavirus cases in France has risen by 13 percent within a day to reach a total of 32,964 as of Friday, the 11th day of national lockdown imposed to contain the outbreak, Health General Director Jerome Salomon said.

A total of 1,995 people had died, an increase of 299 from Thursday, Salomon added in an update.

Further 1,828 people diagnosed with the COIVD-19, the disease caused by the coronavirus, had received treatment in hospitals in the last 24 hours, bringing the total number of hospitalized patients to 15,732. That included 3,787 serious cases, a daily jump of 472.

Following "unprecedented epidemic", mortality caused by the flu-like illness was much higher than expected in five regions, notably in Great Paris region, where deaths jumped by 35.7 percent, Salomon noted.

Earlier on Friday, Prime Minister Edouard Philippe warned that an "extremely high" wave of the coronavirus epidemic would sweep the capital and its suburbs, the country's most populous region ad the most important economic hub, in coming days.

Hospitals in the region would be saturated within 48 hours due to fast-spreading contagion, according to Frederic Valletoux, head of the French Hospital Federation.

"We will be at the limit of our capacities in 24 or 48 hours. We will need to show real solidarity between regions, hospitals and increase the numbers of patient transfers," Valletoux told BFM TV.

"If we leave hospitals to deal with the situation by themselves, leave every region hit by the epidemic to cope alone, we shall head towards a catastrophe," he said.

Bruno Riou, a medical director at the AP-HP hospital group in Paris, urged the immediate transfer of patients to less stricken regions to offer a relief to the capital's hospitals.

"We are pushing out the walls everywhere to receive as much as possible patients in intensive care... We have to find solutions," Riou told France inter radio.

To overturn the rapid contagion curve, the French government decided to prolong containment period, set to end on March 31, by two more weeks.

"After these first 10 days of confinement, it is clear that we are just at the beginning of this epidemic wave. It has submerged eastern France and now it is arriving in the Paris region and northern France," Philippe said.

"The same rules as those currently in force will continue to apply. This confinement period may be extended if the sanitary situation requires it," he added.

Under the lockdown, declared on March 17, people can only leave their homes to buy food and medicine, and all non-essential businesses have been closed.

Further strict restrictions on people's movement were decided to fight against the rampant infection cases. Open-air markets are shut down. People would be allowed to go out for a walk with their children or to exercise once a day for no more than one hour, and within one kilometer of their home. Sanctions against those who break the rules are tougher.