Europe infections near 500,000, WHO chief 'deeply concerned' over rapid escalation 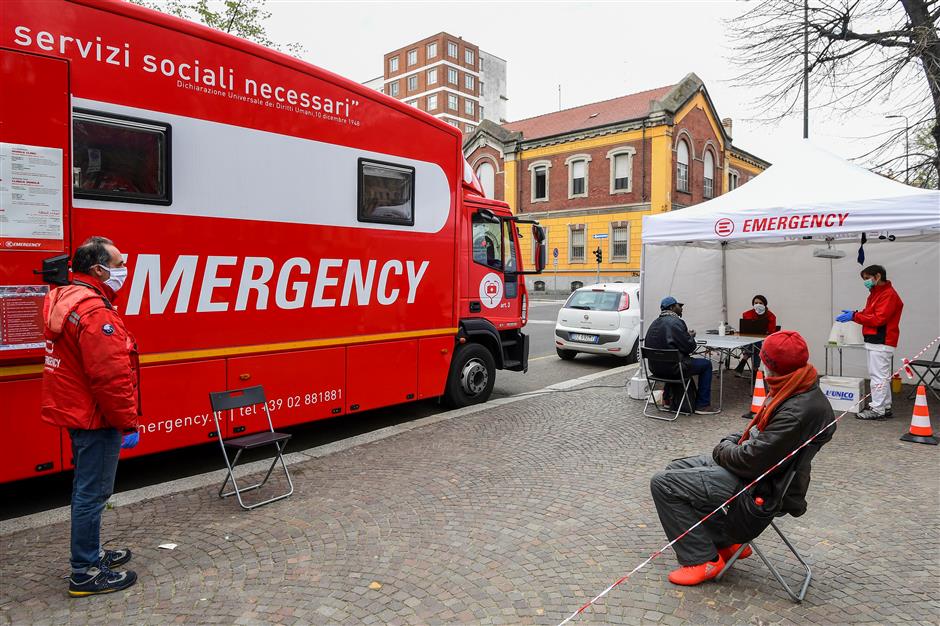 A picture taken in center Milan on April 1, 2020, shows people receiving assistance at the Politruck mobile clinic of Italian humanitarian NGO Emergency, which offers free basic health care for the homeless, the excluded and people with no financial resources during the country's lockdown aimed at curbing the spread of the COVID-19 infection.

The coronavirus pandemic is showing no sign of abating as a global tally indicated on Wednesday that Europe's number of infection cases was approaching 500,000 and the death toll topped 30,000.

Globally, the number of coronavirus cases crossed the 910,000 mark as of 6:50pm GMT on Wednesday, while combined infections in Europe were close to 500,000, according to the US-based Johns Hopkins University, which is tracking the COVID-19 spread in real-time.

"In the next few days we will reach 1 million confirmed cases, and 50,000 deaths," the chief of World Health Organization said.

"As we enter the fourth month since the start of the COVID-19 pandemic, I am deeply concerned about the rapid escalation and global spread of infection," WHO Director-General Tedros Adhanom Ghebreyesus said at a daily briefing.

"Over the past 5 weeks, we have witnessed a near exponential growth in the number of new cases, reaching almost every country, territory and area. The number of deaths has more than doubled in the past week," Tedros said.

In Europe, Italy and Spain bore the brunt of the coronavirus pandemic, accounting for three in every four deaths in the continent.

In Italy, a further 727 people had died of COVID-19 in the 24 hours from Tuesday to Wednesday, taking the death toll to 13,155. But that was the lowest daily tally of fatalities since March 26.

"We have surpassed 13,000 deaths, and this is a wound that pains us especially — it is a wound that will never heal," Italian Prime Minister Giuseppe Conte said in a televised press conference on Wednesday evening.

Spain reported a record 864 deaths in 24 hours, compared to Tuesday's 849, raising the country's death toll to 9,053, according to Spanish health authorities.

Italy's overall number — combining active cases, deaths and recoveries — rose to 110,574 infections as of Wednesday, according to fresh figures released by the country's Civil Protection Department which manages the national emergency response.

In France, 509 more COVID-19 patients died in the past 24 hours, bringing the death tally to 4,032, according to French Director General of Health Jerome Salomon. The cumulative number of infection cases rose to 56,989.

In neighboring Germany, confirmed cases rose by 5,453 within 24 hours to 67,366, the Robert Koch Institute announced. The number of deaths increased from Tuesday's 583 to 732, according to RKI, the government agency and research institute responsible for disease control and prevention.

Italy will remain under a nationwide anti-coronavirus lockdown until April 13, Prime Minister Conte said on Wednesday evening. The current lockdown, which started on March 10, was due to end on April 3.

"We are not in a condition to relax our restrictive measures yet ... and this is why I just signed a new decree that extends the current measures to April 13," Conte continued, adding "we are beginning to see the positive effects" of the lockdown and that relaxing it now would mean that the sacrifices made so far would have been in vain.

"This additional effort will allow us to begin to assess future prospects," he noted. "When the (scientific) data consolidate... we will begin to program a gradual loosening of the restrictions."

"I cannot tell you when that will be," Conte admitted.

Meanwhile, Germany will extend the restrictions on social contacts to April 19 at the earliest, in a bid to contain the spreading coronavirus, Chancellor Angela Merkel said following a video conference with minister-presidents of all 16 federal states.

"A pandemic doesn't take a vacation. That is why it has been made clear that the decisions made also apply beyond Easter," said Merkel.

Citizens are asked to "refrain from private trips and visits from relatives too," according to Merkel. The restrictions, which have been introduced on March 22, were initially due to end on April 5.

Also on Wednesday, Portuguese Prime Minister Antonio Costa said he will request the extension of the current state of emergency for another 15 days, which was declared on March 18 and will end on April 2.

Costa warned that the month of April will be "very dangerous" for the spread of coronavirus, noting that the Easter holiday was usually a period of great movement for people throughout the country.