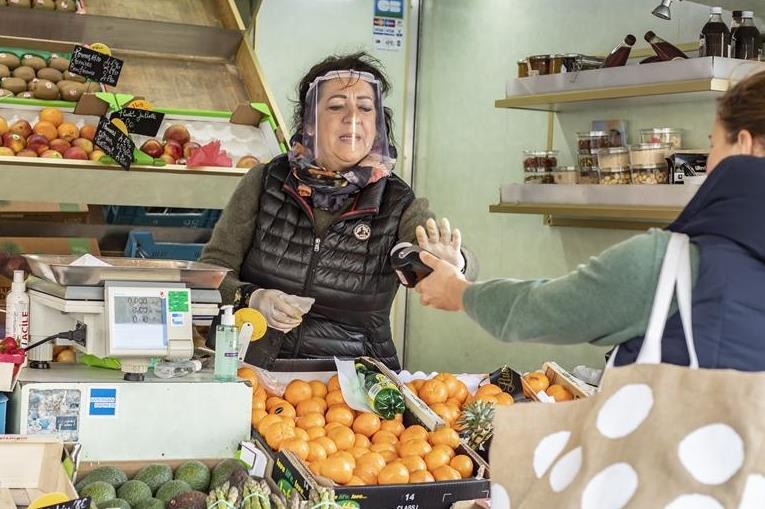 A seller is seen wearing a protective face shield and gloves at an open-air market in Armentieres, northern France, on April 17, 2020.

Despite a rising COVID-19 death toll in France, the number of people being hospitalized fell for a third straight day, offering a glimmer of hope, said Director General of Health Jerome Salomon on Friday.

The death toll in France climbed to 18,681 on Friday, representing a daily rise of 761 compared with 753 registered a day before, said Salomon at a daily briefing on the pandemic.

A decrease of 243 patients needing intensive care was registered on Friday, taking the total number of patients in ICUs down to 6,027.

"In resuscitation units, the balance remains negative for the ninth day. It's good news. It's a slight decrease which is consolidating," Salomon said.

But he warned that admissions in ICUs, surpassing the country's initial maximum capacity of 5,000 beds, remained "at an exceptional level."

"We must absolutely not relax our efforts. The containment begins bearing fruit. There are fewer hospitalized patients, fewer patients in resuscitation. It is a slow but steady decline. We must continue our efforts," he said.

Hospital count showed 418 people, who had caught the respiratory illness, died over the past 24 hours, pushing the toll at 11,478.

The cumulative tally of fatalities in nursing homes increased to 7,203, up 5 percent from Thursday's toll.

Early this week, France extended its national lockdown, imposed in mid-March, by four weeks till May 11. It plans to progressively ease restrictions on people's movement when the second extension ended.