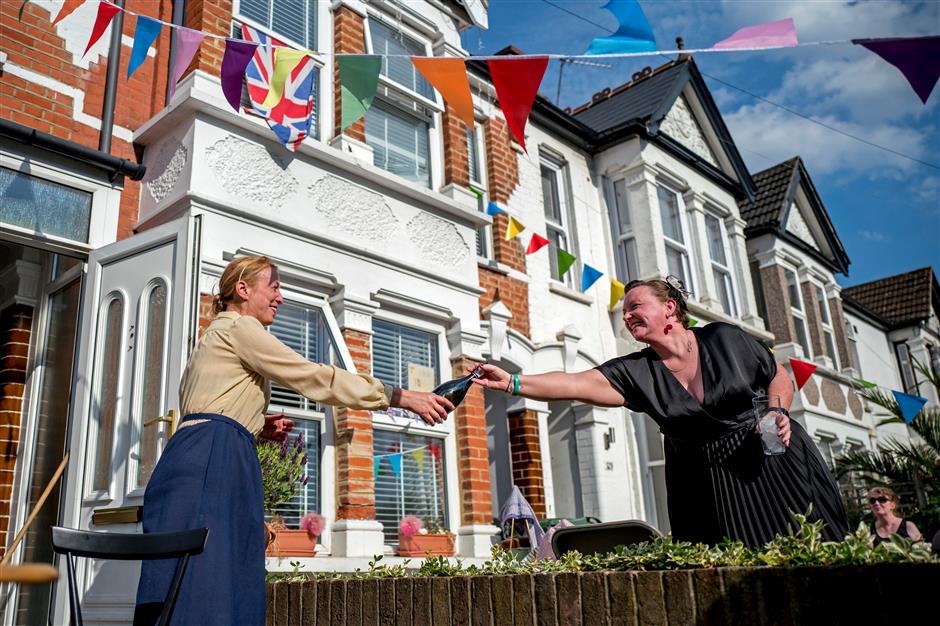 Walthamstow residents share a bottle of champagne at a street party in their front gardens to celebrate the 75th anniversary of VE Day (Victory in Europe Day), the end of the Second World War in Europe in Walthamstow in East London on May 8, 2020.

Britain, locked down by COVID-19 restrictions, celebrated on Friday the 75th anniversary of Victory in Europe Day, a landmark anniversary of the end of World War II in Europe.

Massive celebrations, as well as thousands of street parties, had to be scrapped due to the pandemic. A parade through London, which would have included a diminishing group of World War II veterans, was one of the events called off.

But a mixture of social distancing and virtual gatherings enabled millions of people to ensure coronavirus did not put a dampener on commemorating the anniversary.

A day of poignant and happy events ended Friday night when Britain's Queen Elizabeth II made an address to the nation from Windsor Castle where she and her husband Prince Philip, the Duke of Edinburgh, are in lockdown.

In his message, the monarch said: "Today it may seem hard that we cannot mark this special anniversary as we would wish. Instead we remember from our homes and our doorsteps. But our streets are not empty; they are filled with the love and the care that we have for each other.

"And when I look at our country today, and see what we are willing to do to protect and support one another, I say with pride that we are still a nation those brave soldiers, sailors and airmen would recognise and admire."

She recalled the jubilant scenes as she watched the celebrations outside Buckingham Palace with her younger sister, the late Princess Margaret.

Earlier the monarch's heir and eldest son, Prince Charles and his wife the Duchess of Cornwall, led a two-minute silence in a tribute to those killed and injured when war swept across the European continent in the 1940s.

A gun salute from Edinburgh Castle marked the start and end of the silence.

Later the heir to the British throne read extracts from the diary of his grandfather, King George VI, relating the wartime monarch's experiences of VE Day in 1945.

The diary described the King's relief that the war in Europe was over, with references to the Royal family's iconic appearances on the Buckingham Palace balcony, cheered by tens of thousands of people.

Extracts of a moving VE Day speech made by wartime prime minister Winston Churchill, saying people could enjoy a brief period of rejoicing, were broadcast during the day.

Famed for his V-for-victory finger sign, and his cigar smoking, Churchill ended his message: "Let us not forget for a moment the toils and efforts that lie ahead."

In his message, Prime Minister Boris Johnson described how people fought with courage, ingenuity and endurance on the frontline. On the home front, women had defended British cities against air raids, worked the factories and ran the hospitals.

"This country triumphed thanks to the heroism of countless ordinary people, and because of this, hundreds of millions of people now live in peace and freedom today. Today we must celebrate their achievement, and we remember their sacrifice."

Referring to the virus outbreak, Johnson said it demands the same spirit of national endeavour as shown during wartime.

"We can't hold the parades and street celebrations we enjoyed in the past, but all of us who were born since 1945 are acutely conscious that we owe everything we most value to the generation who won the Second World War," he said.

As dusk turned to evening on Friday night, tens of thousands of people across Britain headed to their streets and front doors to join in singing a song made famous in the 1940s by the British singer Dame Vera Lynn, known at the time as the Forces' sweetheart.

Her iconic song, "We'll Meet Again," was referred to last month when Queen Elizabeth II made a speech to the nation about the impact of COVID-19.

Seventy-five years later the song reverberated around Britain to mark the end of the war, and a hope for end of the pandemic.