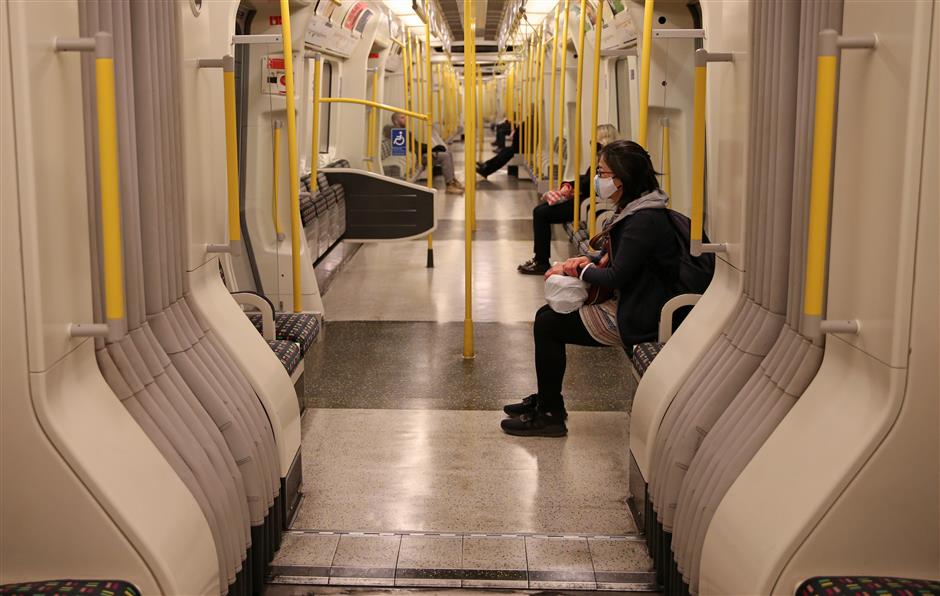 Commuters wearing PPE (personal protective equipment) including face masks as a precautionary measure against COVID-19 travel by public transport during the evening "rush hour," on TfL (Transport for London) Circle Line underground trains in central London on May 14, 2020.

Another 428 COVID-19 patients have died in Britain as of Wednesday afternoon, bringing the total coronavirus-related death toll in the country to 33,614, the Department of Health and Social Care said on Thursday.

As of Thursday morning, 233,151 have tested positive for the virus in Britain, said the department.

Public Health England has approved an antibody test made by Swiss pharmaceutical company Roche, which may now be used to determine how much of the population has been infected by COVID-19.

Antibody testing could be hugely useful as Britain emerges from lockdown as the presence of antibodies to the virus in a person's blood proves they have had it. However, whether the person is immune and if so, how long that immunity lasts, are still very open questions, according to The Guardian newspaper.

In most cases there is an antibody response after infection, but it is going to take time to find out whether the antibodies protect against infection, warned Jonathan Van-Tam, deputy chief medical officer for England.

"And if people are protected, they need to find out how long that protection lasts. You can only find this out over time," he told reporters during Thursday's Downing Street daily press briefing.

According to the Office for National Statistics (ONS), around 148,000 people in England were infected with the virus over the past two weeks.

In its study of the first national snapshot of COVID-19 rates, the ONS estimated that 0.27 percent of the population in England were currently positive for COVID-19, which translates to roughly 10,000 people a day across the entire population between April 27 and May 10, 2020.

The ONS also revealed far higher infection rates among those working with patients in healthcare and those in social care roles, with 1.33 percent of these participants testing positive.

Secretary of State for Transport Grant Shapps on Thursday unveiled a 2-billion-pound (US$2.44-billion) transport package, including 1.7 billion pounds for upgrading the local roads.

While the country has been in lockdown, transport repairs and upgrades have been carried out, Shapps told reporters.

"Bureaucratic bindweed" makes British infrastructure some of the most expensive in the world, but the government wants to revive infrastructure, he said.