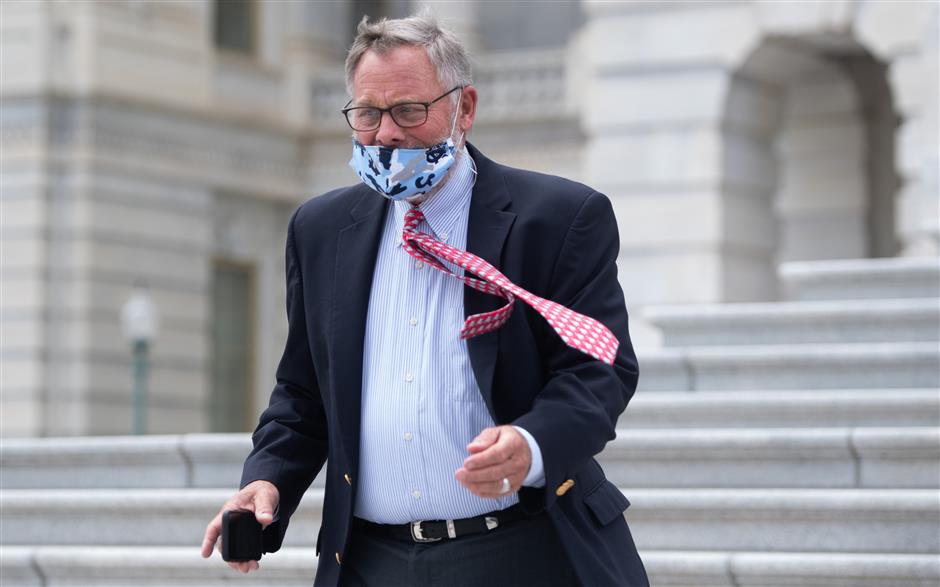 US Senator Richard Burr, Republican of North Carolina, leaves after a vote at US Capitol in Washington, DC, on May 14, 2020.

Republican Senator Richard Burr, who is under investigation for stock trades he had made ahead of a market downturn triggered by the coronavirus pandemic, is stepping aside as chairman of the US Senate Intelligence Committee, Majority Leader Mitch McConnell announced on Thursday.

"Senator Burr contacted me this morning to inform me of his decision to step aside as Chairman of the Intelligence Committee during the pendency of the investigation," McConnell said in a statement. "We agreed that this decision would be in the best interests of the committee and will be effective at the end of the day tomorrow."

The FBI reportedly served Burr with a search warrant and seized a cell phone of his on Wednesday, as part of the Justice Department's investigation into his stock trades.

Burr was reported to have dumped stocks worth up to US$1.72 million in 33 different transactions on February 13, a week before the stock market declined sharply.

He and other senators had received closed-door briefings from US public health officials on the risk posed by the coronavirus, before most Americans were warned about the potential economic fallout of the pandemic.

In a statement on Thursday, Burr said he is stepping aside until the investigation is resolved.

"The work the Intelligence Committee and its members do is too important to risk hindering in any way. I believe this step is necessary to allow the Committee to continue its essential work free of external distractions," the North Carolina senator said.

Speaking to reporters, he added that he has been cooperating with investigators.

Asked about Burr's decision on Thursday, US President Donald Trump told reporters at the White House, "that's too bad," adding that "I knew nothing about it, nothing about it. No, I never discussed it with anybody."

Senator Kelly Loeffler, a Georgia Republican who was appointed to her seat late last year, also faced public scrutiny for trades she and her husband, New York Stock Exchange chairman Jeffrey Sprecher, made early this year.

Loeffler said she had no involvement in the trades made by a financial adviser. A spokesperson for her said on Thursday that "no search warrant has been served" on the senator and that "she has followed both the letter and spirit of the law and will continue to do so."

Senator Dianne Feinstein, a California Democrat, was contacted by the FBI about sales her husband made early this year, her spokesman said on Thursday.

"Senator Feinstein was asked some basic questions by law enforcement about her husband's stock transactions," the spokesman said. "She was happy to voluntarily answer those questions to set the record straight and provided additional documents to show she had no involvement in her husband's transactions."

The United States passed a law in 2012 that has explicitly made it illegal for members of Congress to trade stocks with inside information.