After 69 days of lockdown, lights are slowly turning back on in Italy 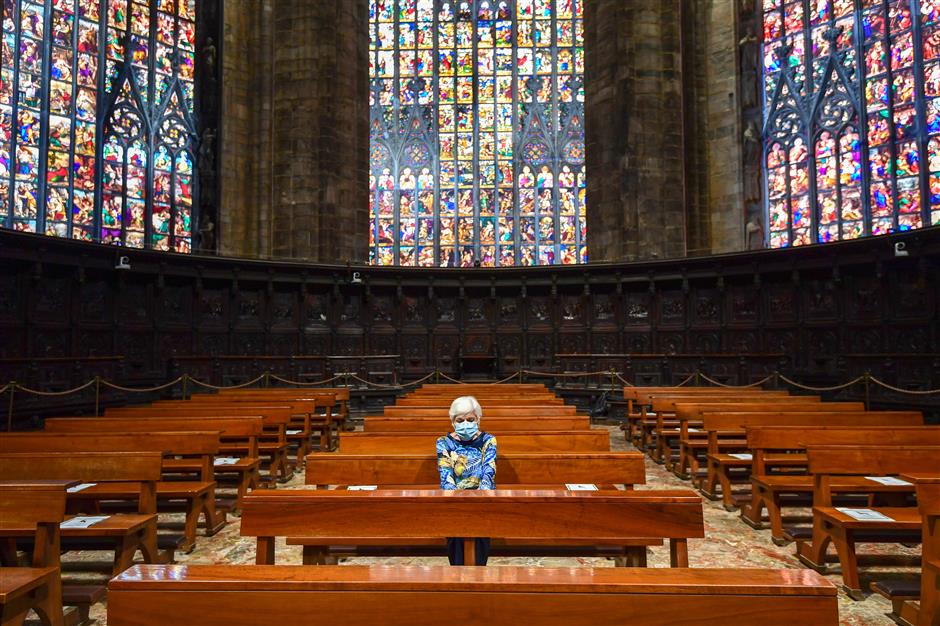 A woman attends a mass at the Cappella Feriale of the Duomo cathedral in Milan yesterday during the country’s lockdown to curb the spread of the COVID-19. Restaurants and churches reopened as part of the country’s latest step in a cautious, gradual return to normality.

Saint Peter’s Basilica in the Vatican reopened yesterday, heralding a return to relative normality in Italy where cafes, restaurants and shops also started serving again after over two months of lockdown to prevent the spread of the coronavirus.

A handful of visitors queued at Saint Peter’s, observing social distancing rules, and were watched by police wearing face masks before having their temperatures taken to enter the church, which has been closed since March 10.

Italy went into full lockdown over two months ago, bringing the economy to its knees. The official death toll from the virus is now about 32,000.

Some of the faithful gathered under the basilica’s giant dome, kneeling at the tomb of pope John Paul II.

Car traffic around Rome’s Colosseum and other main roads was almost back to its chaotic norm on yesterday morning.

“Italy turns the lights back on after 69 days of closure,” wrote yesterday’s La Repubblica daily.

The government started lifting restrictions on May 4, and on Sunday joggers, walkers and cyclists were plentiful on the streets of Rome’s historic center.

With restaurants, bars, cafes, hairdressers, and stores finally allowed to reopen, some people couldn’t wait to rush out and get their grey roots done or purchase new underwear.

“I’ve tried to do some hair care at home over the past weeks but it’s been a disaster,” said Marie-Antonietta, 56, the first customer in the chair at a hairdressers in the Testaccio neighborhood.

Gianluca Politano, 30, said as he wielded the scissors, “I’m not afraid, I can’t afford to be afraid.”

“We’re booked solid for the next two weeks, though we can only have one client at a time. It’s better than nothing though.”

Not all proprietors jumped at the opportunity to receive customers again.

“Either they’re not ready to go or they don’t have the economic strength to do so,” said Mauro, a construction worker sipping a coffee at the only cafe open at Rome’s Piazza Navona.

“We’re getting used to it,” said his friend, Franco, speaking of the slow return to normalcy.

Milan’s Duomo cathedral announced on Friday it had introduced gadgets worn around the neck that beep softly, flash and vibrate if visitors approach too closely to one another.

More than 800,000 commercial activities which have been under lockdown since Prime Minister Giuseppe Conte imposed restrictions on March 9 were allowed to reopen, said Confcommercio, Italy’s largest business association.

Around a dozen people were queueing outside Spanish retailer Zara on a main shopping street in Rome’s center.

One, a Tuscan named Rodolfo, said he had been stuck in Rome for the duration of the quarantine and only had winter clothes with him.

“I’m sweating,” he said, pulling at his jersey.

“Was it exciting to finally go shopping once again? Actually, no,” he said.

Valentina Lombardo at an underwear shop was more excited, “I’m celebrating the end of the lockdown with new pants and a bikini!”