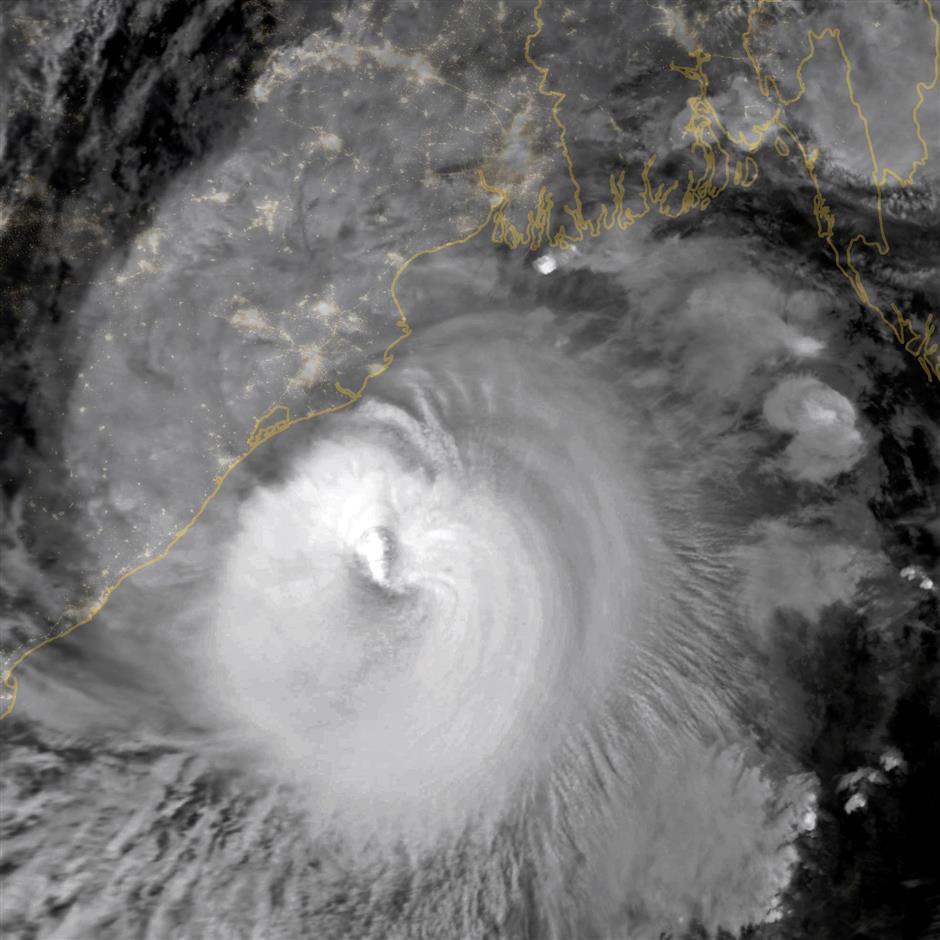 This NASA Earth Observatory image shows Tropical Cyclone Amphan at 9:45pm India Standard Time on Tuesday as it moved north-northeast over the Bay of Bengal.

A powerful cyclone slammed ashore yesterday along the coastlines of India and Bangladesh where more than 2.6 million people fled to shelters in a frantic evacuation made all the more challenging by the coronavirus pandemic.

Cyclone Amphan, an equivalent of a category-3 hurricane, packed winds of up to 170 kilometers per hour and maximum gusts of 190 kmh. Authorities warned it could wreak extensive damage to flimsy houses and a storm surge may push seawater 25 kilometers inland, flooding cities including Kolkata.

The densely populated regions are home to some of the most vulnerable communities in South Asia — poor fishing communities in the Sunderbans and over a million Rohingya refugees in crowded camps in Cox’s Bazar in Bangladesh.

The cyclone began to make landfall yesterday afternoon between Digha, a seaside resort in West Bengal, and Hatiya Islands in Bangladesh. The eye of the storm is likely to pass through the Sunderbans, one of the largest mangrove forests in the world, India’s meteorological department said.

“The forests could act as a vital line of defense by dissipating some of the energy from the waves that would otherwise crash into the coastline,” said K J Ramesh, the department’s former chief.

Areas at risk of landslides were stabilized with bamboo and concrete walls. But the combination of the virus and cyclone could lead to a “new humanitarian crisis,” said Manuel Pereira, deputy chief of mission for the International Organization for Migration in Bangladesh.

“We know that if people are forced to seek communal shelter, they’ll be unable to maintain physical distancing and run the risk of contracting or transmitting the virus.”

Masks and hand sanitizer were hastily added to emergency items in the shelters.

Sobrato Das, a fisherman on Mousuni Island in India, close to the Sunderbans, described the shelters as crowded and said “very few people are wearing masks.”

He said children were crying and women desperately tried to cover their faces with their saris while trying to maintain some distance from each other.

“I have left all my belongings in my house and hope it doesn’t get washed away in the floods,” he said.

Some cyclone shelters in West Bengal were being used for quarantining COVID-19 patients and migrant workers returning to their homes. The state government asked for trains transporting migrants to be suspended. Some schools were turned into shelters.

In Digha, many feared going to the shelters. “They have been home for weeks, and are afraid of going into a crowd where they could get infected,” said fisherman Debasis Shyamal.

The densely populated city of Kolkata, which has nearly 1,500 coronavirus cases, is likely to see flooding, while some centuries-old buildings in the northern half of the city could collapse due to the strong winds, officials warned.