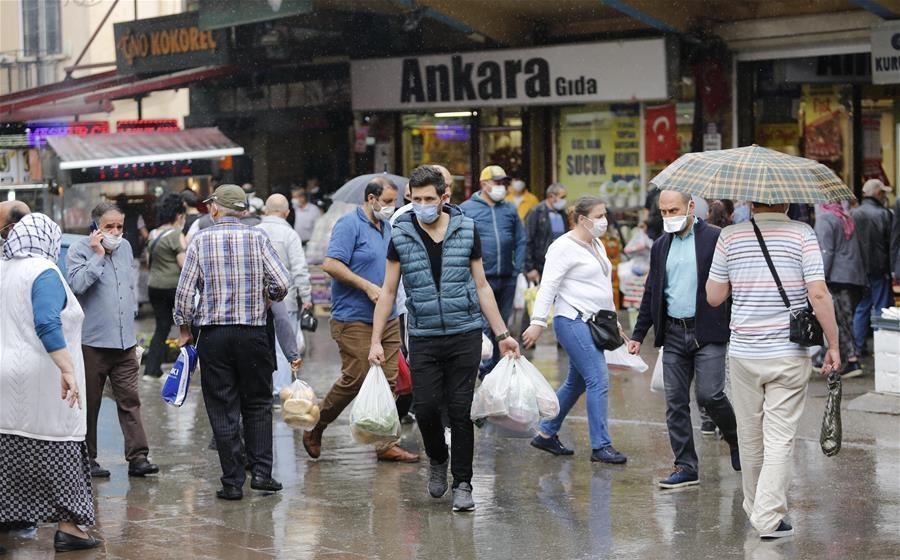 People wearing masks go shopping at a market in Ankara, Turkey, on May 22, 2020.

Turkey's COVID-19 cases on Saturday exceeded 155,000 with more than 1,100 new cases. Meanwhile, Iran witnessed a higher surge of coronavirus cases with the tally surging past 133,000.

The total number of COVID-19 cases in Turkey, the hardest-hit country in the Middle East, climbed to 155,686 after 1,186 new infections were reported, Turkish Health Minister Fahrettin Koca tweeted.

The death toll from the coronavirus in the country rose to 4,308 after 32 new fatalities were added in the past 24 hours, he said, adding that 1,491 more patients recovered, bringing the overall number of recoveries to 117,602.

The country also reported 59 new deaths from the virus on Saturday, raising the death toll to 7,359. A total of 104,072 coronavirus patients have recovered, with 2,633 still in critical condition.

Early on the day, Iranian President Hassan Rouhani announced that the country's touristic sites, including museums and historical sites, will reopen on Sunday after nearly three months of closure over the pandemic.

The United Arab Emirates announced 812 new COVID-19 cases and three more deaths, raising the tally of infections to 28,704 and the death toll to 244.

The total number of recoveries from the virus in the UAE increased to 14,495 after 697 more fully recovered.

Israel reported 29 new COVID-19 cases since Thursday, bringing the tally of coronavirus infections to 16,712, including 14,090 recoveries.

It is worth noting that the active cases in Israel dropped to 2,343, the lowest number since March 25.

Meanwhile, the death toll from COVID-19 in the country remains at 279 as no new death case was recorded since Thursday.

Egypt witnessed a record of 28 daily new deaths of COVID-19, bringing the death toll in country to 735.

The Egyptian Health Ministry also reported 727 new confirmed cases and 254 cases of recoveries, increasing the tally of infections to 16,513 and the total recoveries to 4,628.

The North African country has received three batches of medical aid from the Chinese government to help its fight against the COVID-19 pandemic.

Oman's Ministry of Health announced 463 new cases of infections, bringing the total number of COVID-19 cases in the country to 7,257, including 34 deaths and 1,848 recoveries.

Iraq confirmed 308 new coronavirus cases, the highest daily increase so far, bringing the total number of infections to 4,272, of whom 152 have died and 2,585 recovered.

The country has received batches of medical aid from China and the support from a team of Chinese medical experts during their 50-day stay.

In Lebanon, the number of COVID-19 infections increased by 11 to 1,097, while the death toll remained unchanged at 26.

The total number of COVID-19 cases in Yemen's government-controlled areas increased to 212 with seven new cases.

The number of recoveries in the government-controlled areas increased to six and the death toll increased to 39 in different areas under its control, including the southern port city of Aden.

In Syria, 11 new cases were recorded, raising the overall number of infections in the country to 70 which included four fatalities and 37 recoveries.

A total of 55 people in Gaza have been infected with the coronavirus since March 5, of whom 16 patients have recovered.