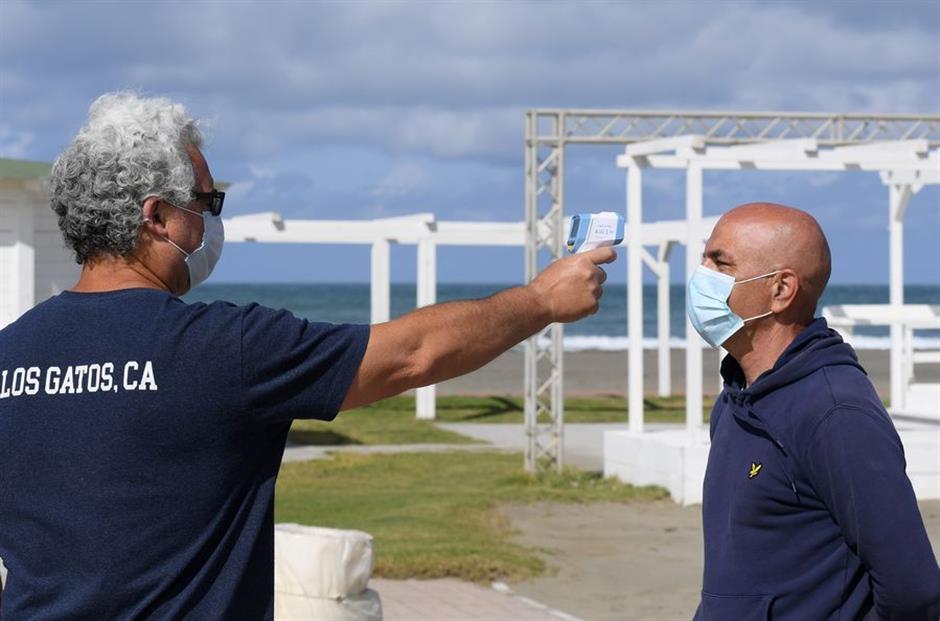 A man gets his body temperature checked at a resort in Fregene, Italy, on May 19, 2020.

The coronavirus pandemic kept a downward path in Italy, with active infections falling by 1,570 to 57,752 on Saturday, according to the latest data by the Civil Protection department.

Of these infections, 572 patients are currently in intensive care, down by 23 compared to Friday. Another 8,695 are hospitalized with symptoms, down by 262, and 48,485 — or 84 percent of those who tested positive — are isolated at home with mild symptoms or none at all.

With 2,120 new recoveries, the total of people cured in Italy rose to 138,840, the Civil Protection bulletin showed. Meanwhile, the country's death toll rose to 32,735 after 119 new fatalities were registered in the past 24 hours.

The overall number of assessed cases in the country, combining active infections, fatalities, and recoveries, stood at 229,327.

Authorities confirmed Saturday that an announced serological screening at a national level would begin next week on 150,000 people, in an effort to ramp up the country's fight against the pandemic.

"The tests on 150,000 Italians will help us further understand how the coronavirus 'behaves,' and how we can tackle it better... We look forward to seeing the results," procurement commissioner for the coronavirus emergency Domenico Arcuri told a press conference.

The sample of people involved was selected as to form six different groups of age, gender, and employment profile, health authorities had explained earlier this month.

The tests will examine each person's blood to check whether they have been exposed to the coronavirus. In this case, it is supposed the person has developed an immunity reaction — even if they have never developed any symptom of the disease — visible through the blood screening.

In case the test is positive, the person will be subject to a swab test to confirm the result.

The national screening, carried out by the Italian Red Cross, will be free of charge, and all of the people involved will be informed about their own results.

This plan will add to separate free serological testing campaigns launched by at least six Italian regions, including Lazio surrounding Rome, and northern Lombardy and Veneto that have been among the most affected by the pandemic.

Some private companies in Italy were also carrying out serological screenings on their employees.

On the economic side of the emergency, Italian authorities showed a first tepid response to a joint proposal for a recovery fund that Austria, Denmark, the Netherlands, and Sweden submitted to the European Commission on Saturday.

The scheme submitted by the so-called "frugal four" European countries focused on loans, instead of grants, opposed common debts, and put a two-year time limit to the fund.

It countered an earlier proposal by France and Germany for a 500-billion-euro (US$545-billion) fund based on grants and common borrowing to help the EU economies most hit by the pandemic to recover.

"Such a harsh recession requires ambitious and innovative proposals," Italy's European Affairs Minister Enzo Amendola wrote on Twitter. "The (European) single market is at risk, as well as the benefits it brings to all Europeans. The document by the 'frugal' countries is defensive and unsuited."

The minister added "more courage" is needed when the European Commission is expected to put on the table its own proposal for a recovery fund on May 27 to sustain the bloc's economic recovery.