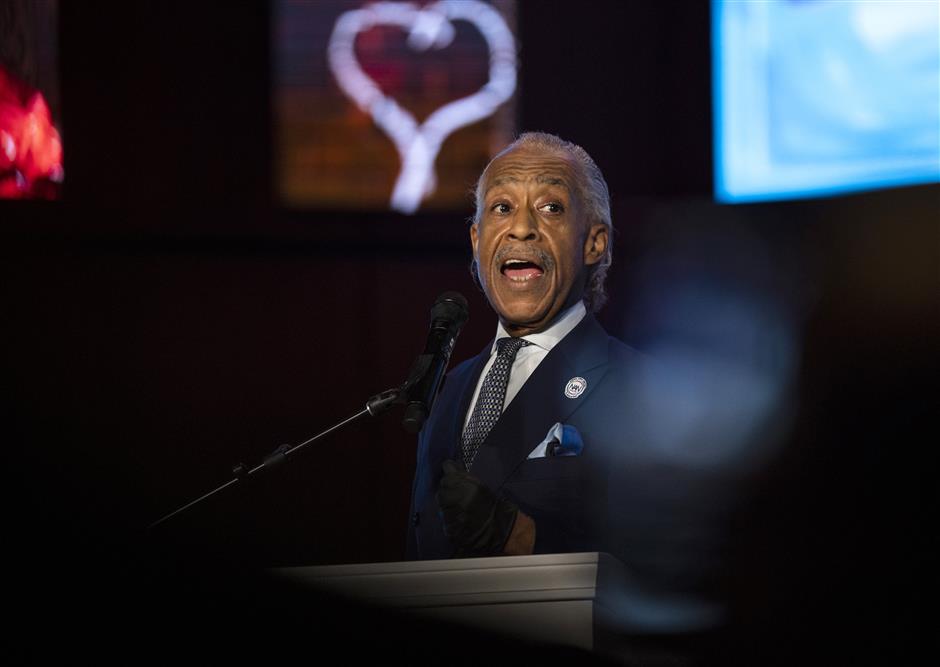 Rev Al Sharpton performs a eulogy during a memorial service for George Floyd at North Central University on June 4 in Minneapolis, Minnesota.

Hundreds of mourners joined an emotional memorial service in Minneapolis on Thursday for George Floyd, the black man killed by police last week, as civil rights leader Al Sharpton vowed mass protests will continue until "we change the whole system of justice" in the United States.

Demonstrations, largely peaceful and somber, took place for a 10th straight night in cities from coast to coast, including New York — where thousands marched over Brooklyn Bridge — as well as Washington, DC, Seattle and Los Angeles, where curfews have been lifted.

In Minneapolis, Floyd's attorney told mourners he would find justice for the 46-year-old, who died during a May 25 arrest when a white police officer knelt on his neck for nearly nine minutes.

"It was not the coronavirus pandemic that killed George Floyd," said Benjamin Crump, who is representing Floyd's family. "It was that other pandemic. The pandemic of racism and discrimination."

The crowd stood in silence for eight minutes and 46 seconds — the same length of time that officer Derek Chauvin spent with his knee on Floyd's neck, a scene captured on video.

Floyd's death has reignited long-felt anger over police killings of African-Americans and unleashed a nationwide wave of civil unrest unlike any seen in the US since Martin Luther King's 1968 assassination.

With marches for racial justice stretching beyond the US and around the world, Sharpton said Floyd's death would not be in vain.

"It's time for us to stand up in George's name and say: 'Get your knee off our necks,'" said the 65-year-old Baptist minister.

"You changed the world, George," he said. "We're going to keep fighting, George."

"We're going to keep going until we change the whole system of justice."

Minneapolis police chief Medaria Arradondo dropped to a knee as the hearse bearing Floyd's remains arrived for the service, streamed live to a large crowd gathered at the flower-covered site where Floyd died. 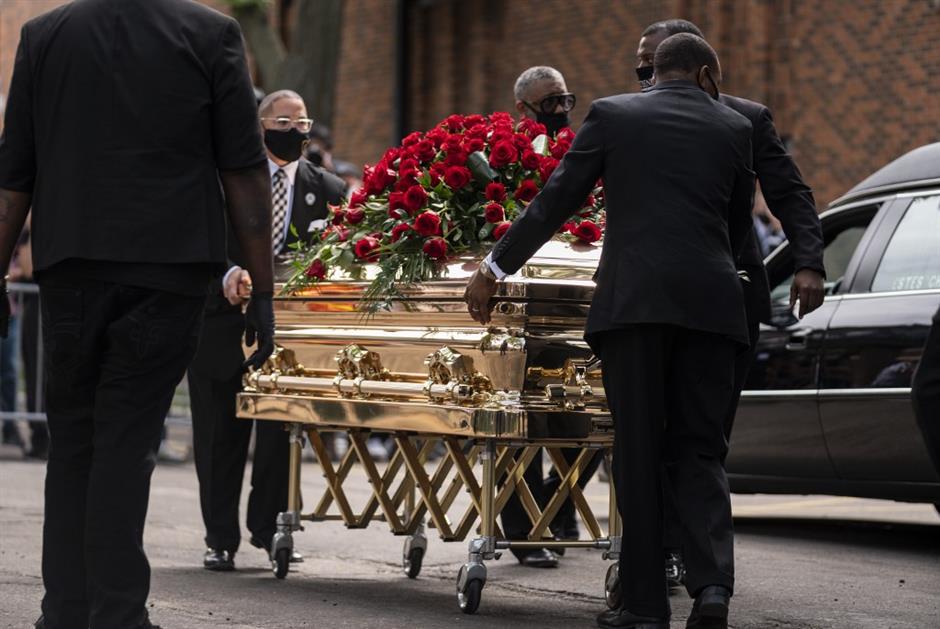 George Floyd's casket is wheeled to a hearse after a memorial service at North Central University on June 4 in Minneapolis, Minnesota.

A vigil for Floyd was also held in New York and was attended by thousands of people, including Floyd's brother, Terrence.

In Richmond, protesters gathered around a statue of Robert E. Lee, after Virginia Governor Ralph Northam announced plans to remove the Confederate leader monument vandalized during the demonstrations.

A Republican senator, Lisa Murkowski of Alaska, broke ranks with her party meanwhile and revealed she was "struggling" with whether to support President Donald Trump's reelection.

Murkowski said her move was prompted by remarks from Trump's former defense secretary James Mattis, who a day earlier delivered a biting assessment of a president who "tries to divide us."

"I thought General Mattis's words were true and honest and necessary and overdue," Murkowski told reporters.

Her comments mark a major break with Trump within the Republican camp, which has largely held together through various crises including his impeachment and current threat to use military force against protests.

While condemning Floyd's death, Trump has adopted a tough stance toward the protesters, saying they include many "bad people" and calling on governors to "dominate the streets."

US civil rights groups filed a case on Thursday suing Trump, after security forces fired pepper balls and smoke bombs to clear peaceful demonstrators outside the White House before the president walked to a church for a photo op earlier this week.

The president's "frankly criminal attack on protesters because he disagreed with their views shakes the foundation of our nation's constitutional order," said Scott Michelman, American Civil Liberties Union legal director.

Low-flying choppers were also used in an apparent show of force above protesters in Washington, DC, on Monday night.

Trump snapped back on Twitter, writing: "The problem is not the very talented, low-flying helicopter pilots wanting to save our city, the problem is the arsonists, looters, criminals, and anarchists, wanting to destroy it (and our Country)!"

The 80-year-old civil rights icon told "CBS This Morning" that the current protests felt "so much more massive and all-inclusive." He also condemned Trump's threat to use military force against demonstrators.

Some of the protests were marred by rioting and looting in the early days, but they have been mostly peaceful since then.

Three of the four Minneapolis police officers who arrested Floyd for allegedly passing a counterfeit bill made their first court appearance on Thursday to face charges of aiding and abetting his murder.

Bail was set at US$1 million each.

The fourth policeman, Chauvin, has been charged with second-degree murder and appeared before a judge last week.