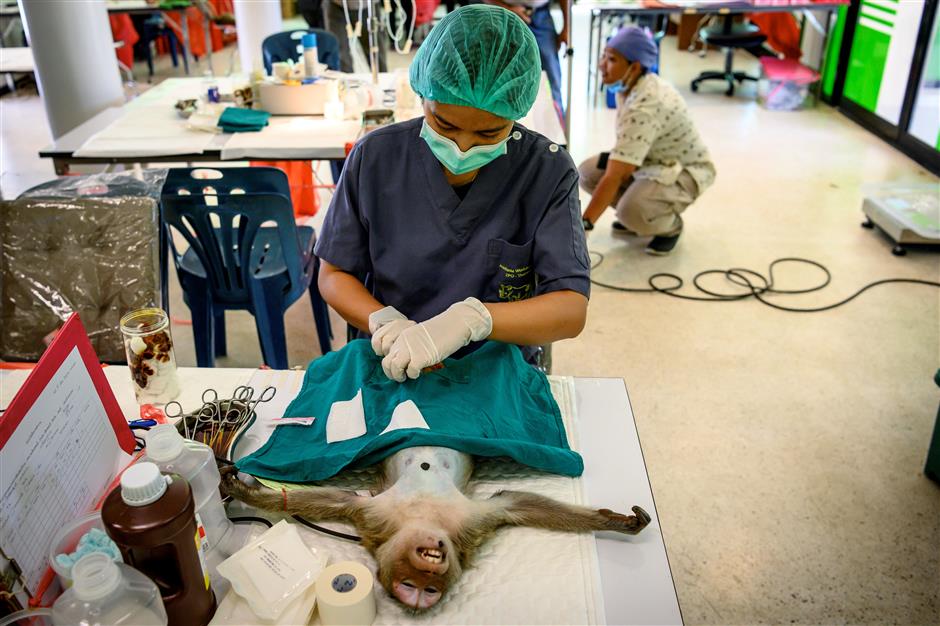 A veterinarian performs a sterilization on a longtail macaque in the town of Lopburi, Thailand, on Sunday.

Thailand has started sterilizing hundreds of monkeys, as the coronavirus pandemic leaves them hungry, aggressive and wrestling food from terrified residents.

Lopburi province and its 2,000 monkeys have long been a draw for tourists who feed them and pose with them for selfies.

But since Thailand closed its borders to curb the coronavirus, the monkeys are not adapting well to their new normal.

To try to control their fast-growing population, authorities have this week placed big cages around the city with tantalizing fruits in them, hoping to lure around 300 monkeys for sterilization.

From the cages, the monkeys are transfered to an operating table, where vets perform a vasectomy or a tubal ligation operation.

They lay on their backs under a green cloth as vets perform a vasectomy or a tubal ligation operation.

The sleeping monkeys get one night to recover before being taken back to their respective tribes.

The government aims to sterilize 500 of the macaques over the next two months.

“We’re not doing this in the wild, only in the city areas,” Supakarn added.