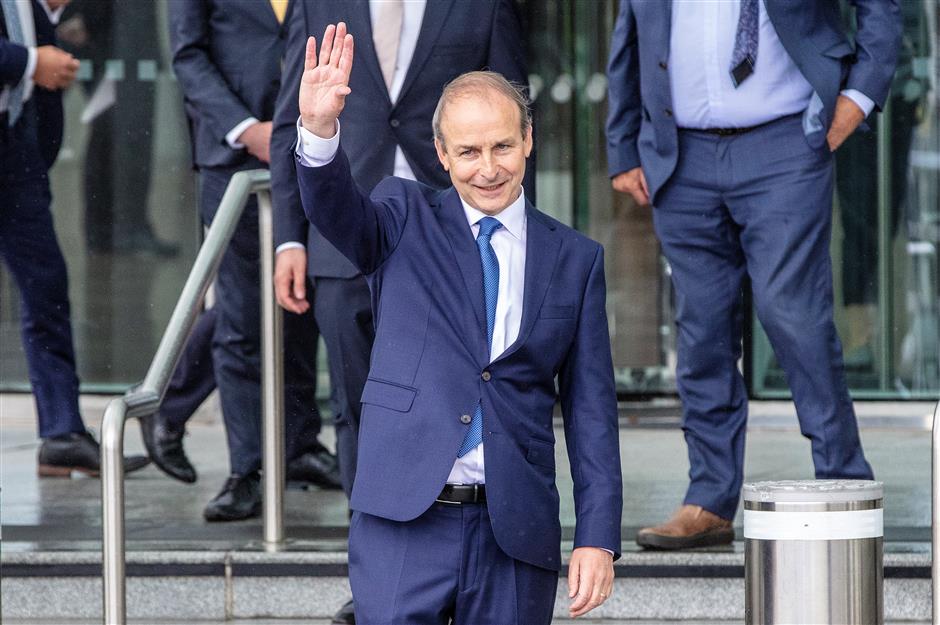 Fianna Fail party leader Micheal Martin was elected as new prime minister of Ireland in a vote held here on Saturday at a special meeting of the lower house of the Irish parliament.

Announcing the voting results, Sean O Fearghail, speaker of the lower house of the Irish parliament, declared that Martin has won the election by receiving 93 votes in favor, 63 votes against and three votes in abstention.

There are altogether 160 seats in the current lower house of the Irish parliament with one seat going to the speaker of the house who was not involved in the vote. O Fearghail is a member of Fianna Fail.

All the 84 parliamentarians of Fianna Fail, Fine Gael and Green Party, the three parties which will form a coalition government led by Martin, have voted for his nomination as the new prime minister while nine independents also supported his nomination in the vote, reported Irish national radio and television broadcaster RTE.

Following the announcement of his win in the vote, Martin delivered a short speech to the deputies sitting sparsely in the 2,000-seat auditorium of the Convention Center Dublin, a venue deliberately chosen to ensure social distancing during the COVID-19 pandemic.

In his speech, Martin said that there is no question of what this government's most important work will be and there is no part of his country that has escaped untouched from the COVID-19 pandemic.

There are nearly 900,000 people relying on special pandemic payments, in what is the fastest moving recession ever to hit the country, he said.

But "Our country has shown time and time again that we can overcome the toughest of challenges — and we will do so again," Martin said.

He also said that the three parties involved in the coalition come from very different traditions, and do not and could not be expected to agree on everything.

It is the first time in Ireland's history that two rival political parties in the country — Fianna Fail and Fine Gael — have agreed to enter a coalition government.

Following his speech, Martin headed to the official residence of the Irish president where he received the seal of office of prime minister from President Michael D. Higgins.

After his meeting with Higgins, Martin traveled to Government Buildings, where his office is located.

On Saturday evening, Martin revealed the make-up of his new government at a renewed meeting of the lower house at the Convention Center Dublin.

The new government consists of 15 cabinet members in addition to three ministers of state attending the cabinet and one attorney general.

Of the 15 cabinet members, six go to Fianna Fail, six to Fine Gael and three to Green Party.

The three newly appointed ministers of state are also equally distributed among the three parties.

The lower house approved the appointments of the new government members through a vote.

The appointed members of the new government later traveled to Dublin Castle where they each received the seals of their office from President Higgins, marking the final step in forming the new government that has been delayed for almost four and a half months following the general election held in February 8.