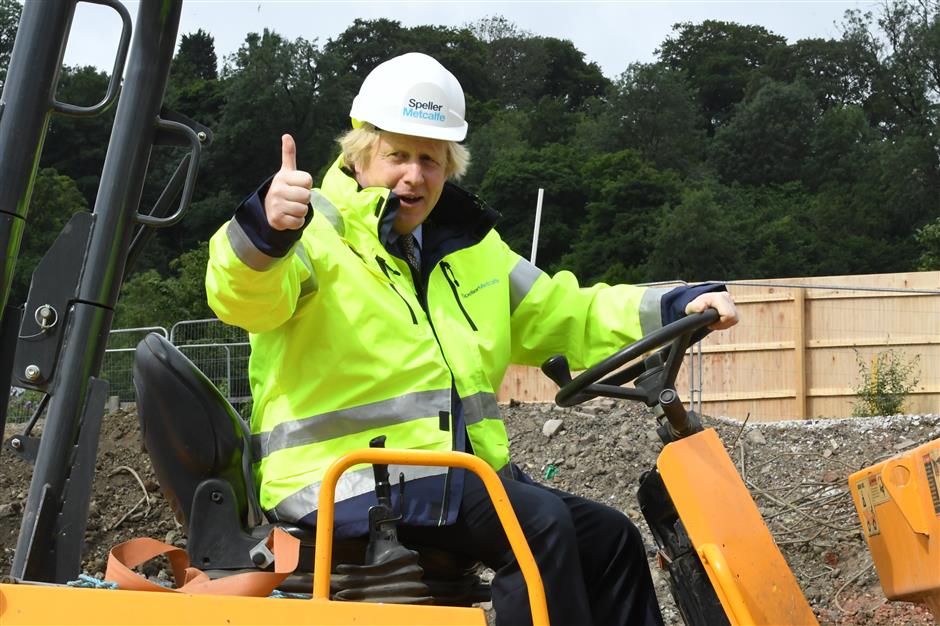 Britain’s Prime Minister Boris Johnson visits the Speller Metcalfe’s building site at The Dudley Institute of Technology in Dudley, central England on Tuesday, ahead of a speech he is due to make on the economy.

As Britain emerges from lockdown, Johnson is looking to move past criticism of his government’s handling of the pandemic with a plan to repair the economic damage and reshape the country.

“We cannot continue simply to be prisoners of the crisis,” Johnson said. “We must work fast because we’ve already seen the vertiginous drop in GDP.”

Nevertheless, with an exhortation to “build, build, build,” Johnson announced plans to speed up government infrastructure spending and “scythe through red tape” around planning to make property development easier.

On Monday, Johnson told on the newly-launched Times Radio that a “Rooseveltian” approach to recover the economy from the coronavirus shock would be the choice for UK, and a return to austerity would be a mistake.

Roosevelt is renowned for implementing the “New Deal” program that funded the mass building of US public infrastructure, aiming to help the country recover from economic crisis during the Great Depression.

“I’m conscious ... that it sounds like a prodigious amount of government intervention, sounds like a new deal ... If that is so, then that is how it’s meant to sound,” Johnson said.

Tuesday’s headline spending announcement of 5 billion pounds (US$6.13 billion) amounts to around 5 percent of gross public sector investment last year. Most had already been announced and is only being spent sooner than planned.

The 5 billion pounds of accelerated investment will be made up of projects including hospitals, schools and roads. Finance minister Rishi Sunak will announce further details next week.

A 1-billion-pound school-building program has already been unveiled on Monday as Johnson said it “will make sure our schools and colleges are fit for the future, with better facilities and brand new buildings.”

A new underground train line in central London is over budget and late, as is a north-south high speed rail link. After decades of discussing airport expansion at London Heathrow, the project remains mired in legal challenges.

The 5 billion pounds of accelerated investment will be made up of projects including hospitals, schools and roads.