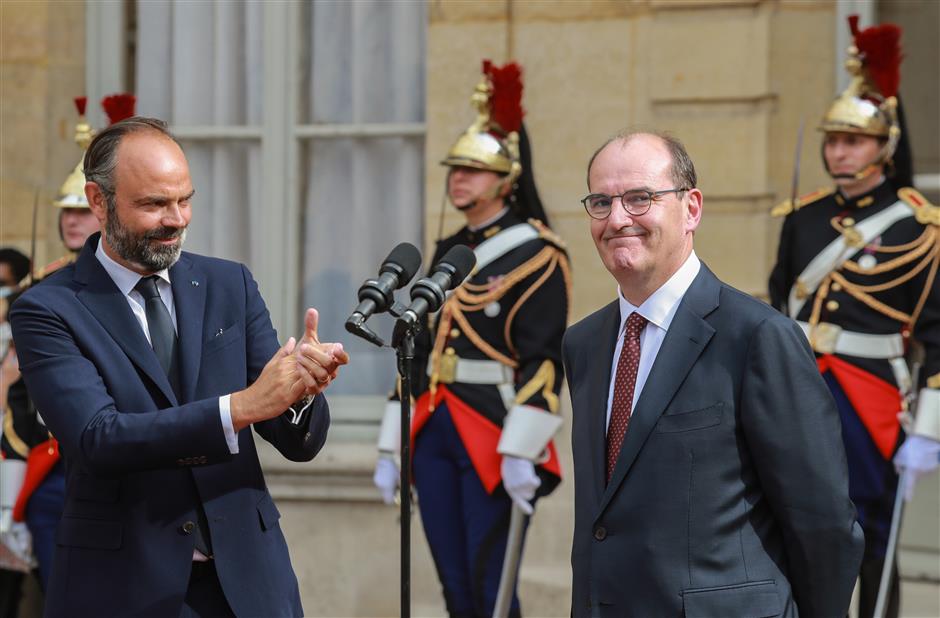 Former French Prime Minister Edouard Philippe (left) and newly appointed Prime Minister Jean Castex react as they give a speech during the handover ceremony in the courtyard of the Matignon Hotel in Paris on July 3, 2020.

The new premier, Jean Castex, was drawn from the right-wing opposition to Macron's centrist party, and was totally unknown to most in France until now.

But Castex, a former top aide to ex-president Nicolas Sarkozy, has been in charge of the country's progressive emergence from the coronavirus lockdown, a policy greeted as a relative success by experts.

"Let's be clear: I'm not here to seek the limelight. I'm here to get results," Castex said in what was effectively his introduction to the general public during a prime-time interview on TF1.

He said he would present his political road map next week, and a wider cabinet overhaul is expected in the coming days.

Macron has promised a "new course" for France to deal with the crisis, which has plunged France into its worst recession since World War II and left millions of people facing unemployment.

The former investment banker, who swept to power in 2017 on pledges to radically reform France, already has a wary eye on his 2022 reelection bid after months of protests and strikes that preceded the coronavirus outbreak.

Speculation that Philippe was on the way out mounted this week after Macron's centrists were routed in municipal elections last Sunday, which saw the Greens take control of several major cities.

Philippe, a popular right-wing politician who never joined Macron's Republic on the Move party, nonetheless easily won his bid to be mayor of Le Havre.

His approval ratings have surged over his handling of the coronavirus crisis, while those of Macron, who has pursued ambitious economic reforms since coming to office in 2017, have fallen.

During the official handover ceremony at the Hotel de Matignon, Philippe gave wide smiles while saying his goodbyes, posing for photos and selfies while sporting a telling choice of cuff links — minature purple flip-flops.

While many analysts thought Macron would tack left or look farther afield for his new prime minister, Castex is a pure product of the French administrative elite, having attended the same ENA managerial university as Macron and Philippe.

"We might have expected a political shift, but this is a technocrat," Christian Jacob, head of the Republicans, told AFP, indicating that Castex would be cast out of the party.

His nomination comes after Philippe has pushed through a series of Macron's controversial overhauls that sparked massive strikes as well as the fierce "yellow vest" anti-government revolt.

Sources close to Philippe told AFP on Friday that he would help Macron "consolidate" his majority in parliament, after an embarrassing series of defections in recent weeks by lawmakers unhappy with the president's policies.

Press reports had suggested that Macron might keep Philippe after all, not least after he praised his work as "remarkable" in an interview with regional newspapers published on Thursday.

Nonetheless, "we have to chart a new course" with "a new team," Macron said.

Other top ministers could also be on the way out, but analysts noted that Macron has a thin bench of potential replacements, not least because his young party has failed to produce any standouts from its parliamentary ranks.

Under particular pressure is Interior Minister Christophe Castaner, who has been assailed by critics over the failure to contain the rioting and looting that marred the "yellow vest" protests of 2018-2019.

More recently, Castaner has drawn the ire of police who say he has failed to support them against renewed claims of violence and racism in the wake of the Black Lives Matter movement.

Since the start of Macron's presidency, a total of 17 ministers have quit the government, most recently Agnes Buzyn, who stepped down as health minister in a doomed bid to wrest the Paris mayor job from Socialist Anne Hidalgo.