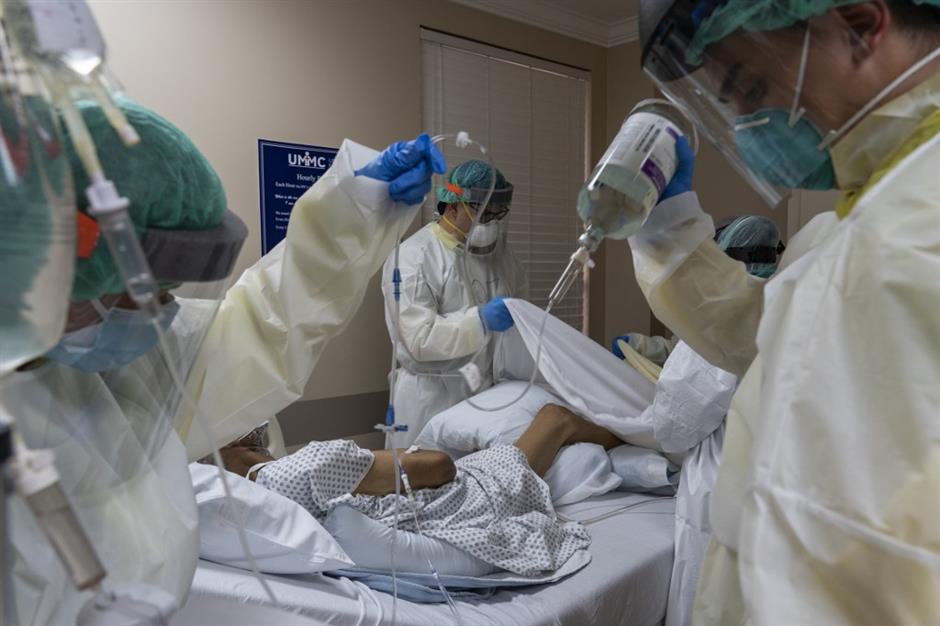 Members of the medical staff treat a patient in the COVID-19 intensive care unit at the United Memorial Medical Center on July 2, 2020, in Houston, Texas.

Despite its claim to host the world's largest concentration of hospitals and research labs, the city of Houston is dangerously close to being overwhelmed by the explosion of novel coronavirus cases sweeping across Texas.

Since the Memorial Day weekend in late May and major anti-racism protests in June, "it is an unbelievable trajectory," as if the flood gates had opened, said Faisal Masud, director of critical care at Houston Methodist Hospital.

Masud has been on the frontlines of the battle against COVID-19 since it reached Houston.

"This has been relentless for us," he told AFP. "We didn't get a break."

"These things are taking a physical and emotional strain on us... because we not only have to worry about ourselves but our families also."

The Texas Medical Center is a vast complex covering nearly 5 square miles (13 square kilometers). Founded in 1945, it has grown rapidly around a nucleus formed by the MD Anderson Cancer Center, the country's largest.

"We can't expand and keep on expanding," Masud said. "People who are non-COVID may not be able to get their care in a timely fashion."

"Patients may not be able to get ambulances in time... All this leads to harm and death."

At another local hospital, the United Memorial Medical Center, the unit dealing with coronavirus is on the verge of overflowing.

Some patients are severely emaciated, others curled up in fetal positions, still others are suffering horrific hallucinations.

Conditions for health workers are miserable. Facing the grave disease threat, they double up both on masks and gloves and don three layers of white or bright yellow protective gowns.

Many health workers sleep only a few hours at night, and take breaks in a small, crowded waiting room.

Texas was among the first US states to reopen.

Beginning May 1, restaurants and shops in Houston — the fourth-largest American city — were allowed to reopen with reduced capacity, followed by bars and beauty salons, as in the rest of the state.

But in recent weeks the city in southeastern Texas has become a virus hotspot.

At least 2,250 COVID-19 patients are currently hospitalized in the Houston area, according to Texas public health officials.

Governor Greg Abbott, a Republican, on Thursday made mask-wearing obligatory in most parts of the state, just six days after he ordered recently reopened bars to close again.

Lina Hidalgo, an official in Harris County, which includes Houston, told local news media on Thursday that she was pressing for "an enforceable stay-at-home order."

"I'm afraid that waiting will only lead to more lives lost, prolong the economic pain, and bring about further crises," she said.

"We want this trajectory to either plateau or start coming down," Masud said.

"I want people not to be socially isolated, but socially distant."