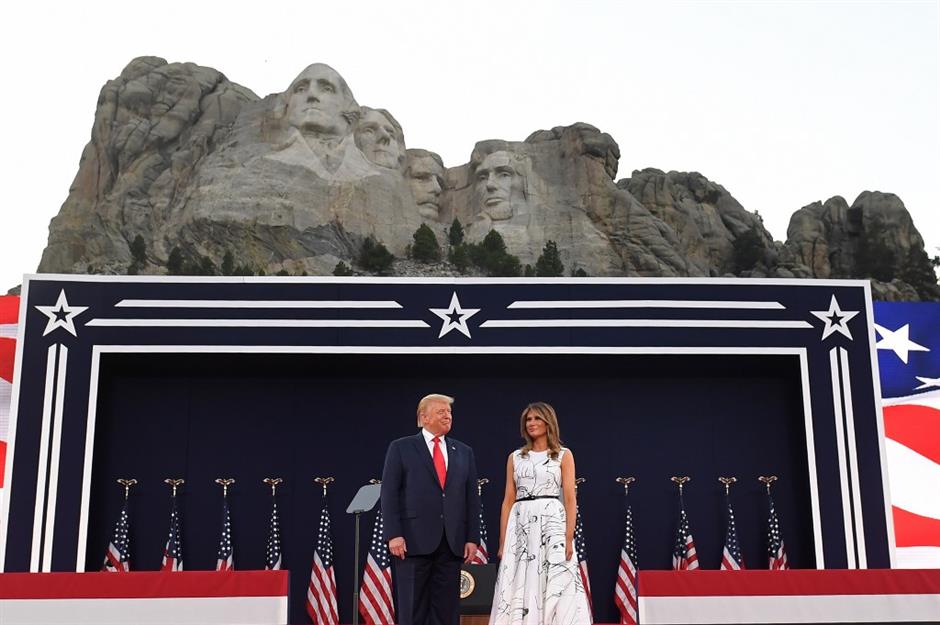 Trump, under fire for his response to America's spiraling coronavirus caseload four months before the presidential election, spoke on the eve of the July 4th celebrations before thousands of closely packed people — many of whom chanted "Four more years;" few of whom were wearing masks.

In the shadow of four notable predecessors — George Washington, Thomas Jefferson, Theodore Roosevelt and Abraham Lincoln, whose likenesses are carved into a granite cliff in South Dakota's Black Hills — the president called on supporters to defend America's "integrity."

He accused protesters calling for racial justice of "a merciless campaign to wipe out our history, defame our heroes, erase our values, and indoctrinate our children."

"The violent mayhem we have seen in the streets and cities... is the predictable results of years of extreme indoctrination and bias in education, journalism and other cultural institutions," he added.

The US has been engulfed by a once-in-a-generation reckoning on racism and police brutality since George Floyd, an African-American man, was killed by a white police officer in Minneapolis on May 25.

That has included a rethink of how America venerates symbols of the pro-slavery Civil War South, from removing statues of Confederate generals to retiring the Mississippi state flag, which featured the Confederate emblem.

Trump — who has also been criticized for his response to the protests — promised Mount Rushmore would never be defaced, and that he would never abolish the police or the right to bear arms.

"They want to silence us — but we will not be silenced," he said to cheers, adding later that it was time to "speak up loudly, strongly, powerfully and defend the integrity of our country."

"The best is yet to come," he said, promising to establish "a vast outdoor park that will feature the statues of the greatest Americans who ever lived."

Trump did briefly thank those "working tirelessly to kill the virus" during his comments on Friday.

But otherwise he has had little to say about the shocking increase in US virus cases. On Friday a record 57,000 new infections were confirmed.

The surge, especially in the south and west of the country, has cast a pall over Independence Day and seen US residents blacklisted by Britain and Europe, who have opened their borders to others.

Trump did tweet on Thursday the rise was because "our testing is so massive and so good," calling that "great news."

US testing has risen sharply, but health experts say it still lags on a per capita basis behind many other countries and does not fully explain the case rise. They also note that deaths tend to increase a few weeks after cases rise.

Vice President Mike Pence postponed a trip to Arizona this week after members of his Secret Service detail reportedly showed signs of COVID-19, and he and other Republican leaders have belatedly begun emphasizing the importance of wearing masks.

On Friday US media reported Donald Trump Jr's girlfriend, Kimberly Guilfoyle, had tested positive for COVID-19. She is the third person with close contact to the president to be diagnosed with the virus.

Former President Barack Obama weighed in on Friday, tweeting: "This holiday weekend, let's be safe and smart. It's going to take all of us to beat this virus. So wear a mask. Wash your hands. And listen to the experts, not the folks trying to divide us."

Trump, accompanied by first lady Melania, was warmly welcomed in South Dakota, a state he won easily in 2016.

But Randy Seiler, who heads the state Democratic party, told CNN the planned festivities are problematic: That they are offensive to Native Americans who consider the land sacred, that the fireworks pose a fire risk in the extremely dry area, and that the virus danger is real.

The event, he told CNN, "is a recipe for disaster."

Trump has long expressed his fascination with the imposing Mount Rushmore sculpture.

In 2017, he joked about someday seeing his own face joining the Rushmore likenesses of his four predecessors — though the National Park Service says "the work is complete in its present form."