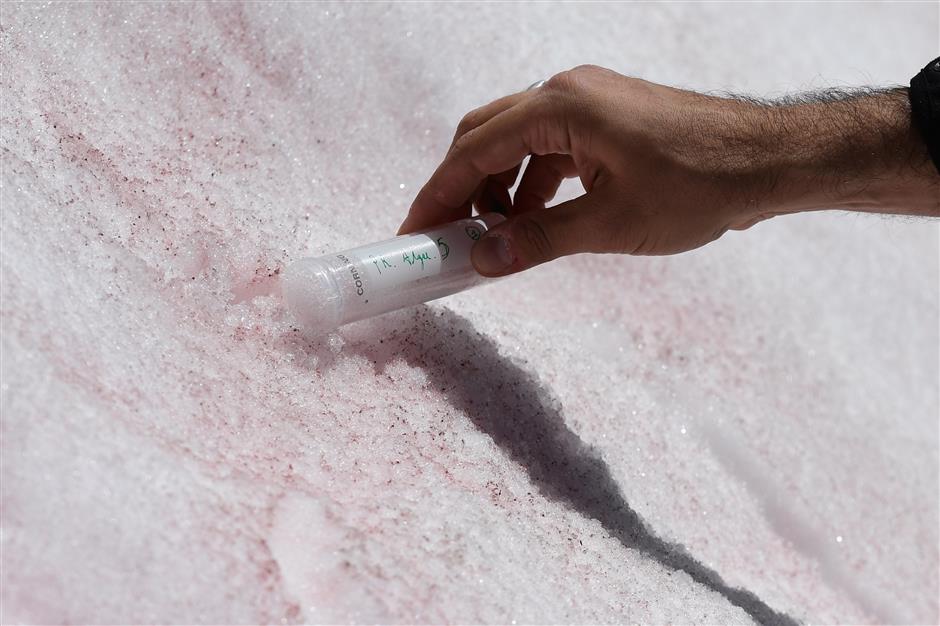 Biagio di Maio, researcher at National Research Council takes samples of pink colored snow on Saturday on the top of the Presena glacier near Pellizzano.

Scientists in Italy are investigating the mysterious appearance of pink glacial ice in the Alps, caused by algae that accelerate the effects of climate change.

There is debate about where the algae come from, but Biagio Di Mauro of Italy’s National Research Council said the pink snow observed on parts of the Presenae glacier is likely caused by the same plant found in Greenland.

“The alga is not dangerous, it is a natural phenomenon that occurs during spring and summer in the middle latitudes but also at the Poles,” said Di Mauro.

The plant, known as Ancylonema nordenskioeldii, is present in Greenland’s so-called Dark Zone.

Normally ice reflects more than 80 percent of the sun’s radiation back into the atmosphere, but as algae appear, they darken the ice so that it absorbs the heat and melts more quickly. “Everything that darkens the snow causes it to melt because it accelerates the absorption of radiation,” said Di Mauro.

“We are trying to quantify the effect of other phenomena besides the human one on the overheating of the Earth,” Di Mauro added.