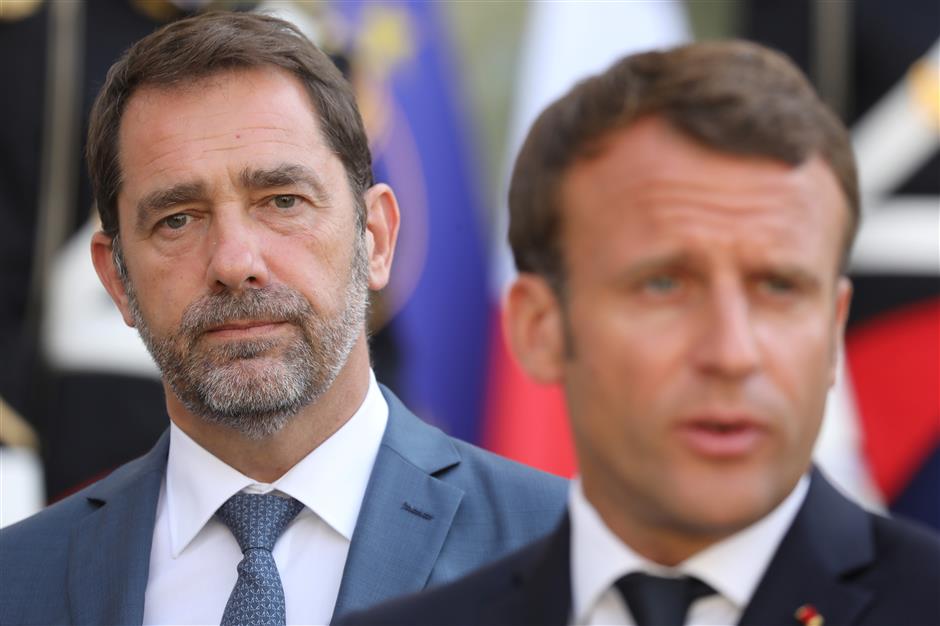 In this file photo taken on July 22, 2019, French then Interior Minister Christophe Castaner (left) listens to French President Emmanuel Macron speaking to journalists at the Elysee presidential Palace in Paris.

President Emmanuel Macron on Monday replaced his embattled interior minister and shuffled other Cabinet positions as he seeks a "new path" to see France through its worst economic crisis since World War II and win reelection.

Bruised by the drubbing of his ruling party in local elections last month, Macron had on Friday appointed senior bureaucrat Jean Castex as prime minister and spent the weekend in consultations with the new premier to appoint a government.

In the most significant change on Monday, Macron dropped Christophe Castaner as interior minister and replaced him with budget minister Gerald Darmanin.

Darmanin, 37, is considered one of the president's most loyal allies but is also is the subject of a rape investigation.

Castaner, appointed in 2018, had struggled to balance increasing criticism for alleged heavy-handedness and racism within the police force and complaints from officers themselves that he failed to protect them.

Health Minister Olivier Veran, who has led the country's ongoing battle against the coronavirus outbreak, which has claimed nearly 30,000 lives, is also staying on.

Macron axed the only black member of his Cabinet, government spokeswoman Sibeth Ndiaye, who caused a recent controversy by suggesting a long-standing ban on racial population data in France should be overturned.

However Elisabeth Moreno, a tech businesswoman who was born in Cape Verde, becomes minister for equality.

And making a return to government is Roselyne Bachelot, 73, a veteran of previous right-wing governments including under Jacques Chirac and who is tasked with saving the arts in France as culture minister.

After the dismal local election showing for his centrist Republic on the Move (LREM) party, Macron replaced his popular prime minister Edouard Philippe with relative unknown Castex, a bureaucrat and small-town mayor.

Analysts said the move reflected a desire by Macron to tighten his grip on executive power after reports of policy disagreements with Philippe — who fared far better than the president in opinion polls.

Macron is looking ahead to the 2022 presidential election, in which he is likely to be challenged by far-right leader Marine Le Pen.

Macron wrote on Twitter on Sunday that a "new path" was needed, listing the new government's priorities as "reviving the economy, continuing an overhaul of our social protection and the environment, reestablishing a fair republican order and defending European sovereignty."

But the president of the right-wing opposition The Republicans (LR) Christian Jacob rubbished the reshuffle as a "game of musical chairs" saying that in the face of "unprecedented crisis" Macron was simply "trying to buy time."

In perhaps the biggest surprise of the reshuffle, star criminal lawyer Eric Dupond-Moretti, famous for his record in winning acquittals for his clients, was named minister of justice.

"Naming a person who is so divisive and who has such scorn for the judiciary is a declaration of war toward the judiciary," said Celine Parisot, head of the USM judicial union, of the controversial appointment.

For the environment ministry, Macron appointed Barbara Pompili, a former secretary of state for biodiversity,  to replace Elisabeth Borne.

The green EELV party, of which Pompili was a member before joining the LREM, made huge gains in the local elections and said it would not join the new government if asked, accusing Macron of paying lip service to environmental issues.

Castex, not specifically known for a green agenda, has insisted since his appointment that a healthy environment "is not an option but an obligation."