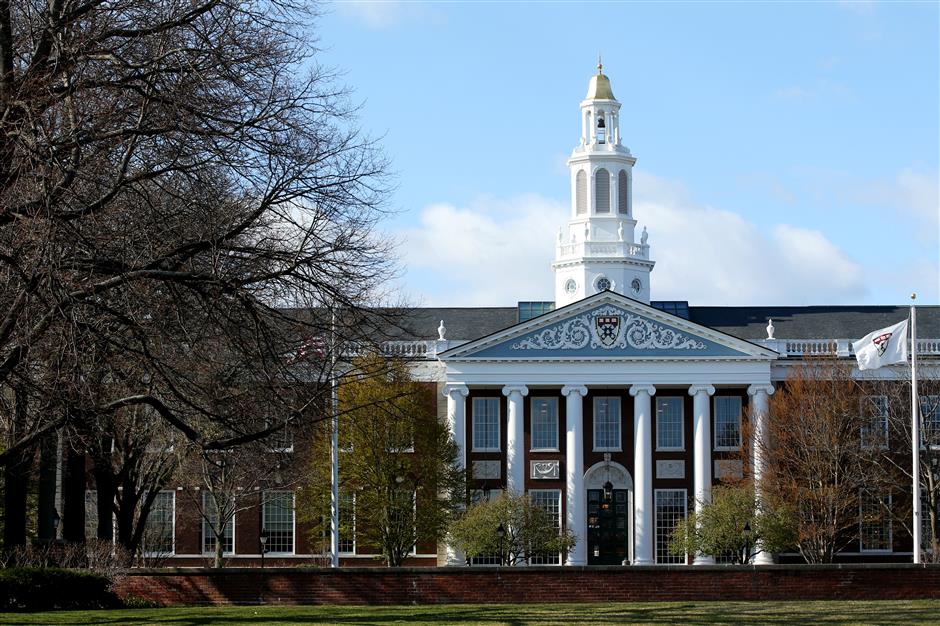 In this file photo a general view of Harvard University campus is seen on April 22, 2020 in Cambridge, Massachusetts. Harvard and MIT asked a court on Wednesday to block an order by President Donald Trump's administration threatening the visas of foreign students whose entire courses have moved online because of the coronavirus pandemic.

Harvard University and the Massachusetts Institute of Technology have asked a federal court to temporarily block a Trump administration rule that would bar foreign students from remaining in the US if their universities are not holding in-person classes this fall, Harvard’s president said on Wednesday.

Lawrence Bacow, in an e-mail addressed to the Harvard community, said: “Within the last hour, we filed pleadings together with MIT in the US District Court in Boston seeking a temporary restraining order prohibiting enforcement of the order. We will pursue this case vigorously so that our international students — and international students at institutions across the country — can continue their studies without the threat of deportation.”

The move by Harvard and MIT, two of the most elite US universities, comes two days after the Trump administration issued an order that could force tens of thousands of foreign students to leave the country if their schools hold all classes online. Harvard had announced it would hold all classes online in the coming fall term.

The Trump administration announcement blindsided academic institutions grappling with the logistical challenges of safely resuming classes as the coronavirus pandemic continues unabated around the world, and surges in the United States.

It also marked an unexpected reversal of exceptions to the rules limiting online learning for foreign students when colleges and universities in March rushed to shutter campuses and move to virtual classes as the pandemic forced lockdowns.

“The order came down without notice — it’s cruelty surpassed only by its recklessness,” Bacow’s e-mail said. “It appears that it was designed purposefully to place pressure on colleges and universities to open their on-campus classrooms for in-person instruction this fall, without regard to concerns for the health and safety of students, instructors, and others.”