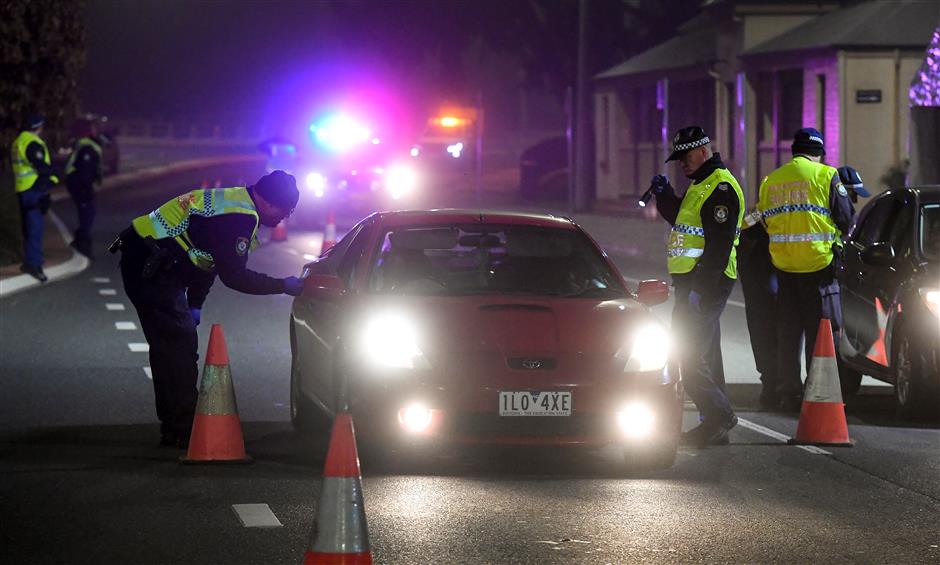 Police in the New South Wales border city of Albury check cars crossing the state border from Victoria on Tuesday as authorities close the border due to an outbreak of COVID-19 coronavirus in Victoria.

The lockdown in Australia’s second-largest city Melbourne will likely erase nearly A$5 billion (US$3.5 billion) of economic output over six weeks, slowing a broader national recovery and forcing the government to expand its already massive debt-funded stimulus.

Australia has been among the most successful countries in curbing the spread of the coronavirus but the lockdown in the state of Victoria and its capital Melbourne has hurt hopes of a faster and sharper economic recovery.

“Our initial sense is that the reopening reversal stemming from the lockdown will see the economy surrender some — but not all — of the better than expected trajectory,” Deutsche Bank economist Phil Odanaghoe wrote in a research note.

Crucially, the shutdown will close cross-border trade and movement between Victoria and New South Wales, which collectively account for more than half of Australia’s economy and population.

The two states, separated by the Murray River had previously remained open to each other even as other states closed their domestic borders.

In 2019, the air passenger route between the state capitals of Sydney and Melbourne was the second busiest in the world, according to industry analytics group OAG.

Westpac bank downgraded its forecasts for growth in Australia’s A$2 trillion economy to a 4.2 percent contraction in 2020 from 4 percent previously.

“The events in Melbourne highlight the risks to this scenario around the containment of the virus, other shutdowns, and the inevitable savage loss in confidence were that to occur,” chief economist Bill Evans said.

Other states and territories are sticking to their planned reopenings, with Queensland, South Australia, Tasmania and the Northern Territory set to reopen their borders this month to each other and to New South Wales, the country’s largest state economy.

That would be positive for domestic tourism, retail spending and business supply chain management.

Morrison has repeatedly said the temporary measures that are set to cost his government about A$160 billion, or 8 percent of GDP, will end in September.

However, he now faces increasing pressure to extend this support, which includes household income relief and provisions for workers to unlock some of their pension funds.

The government will publish a “mini-budget statement” on July 23, providing some clarity on what measures would continue and in what form.

Policymakers are also bracing for a hit to confidence in other parts of the country from the Melbourne lockdown.

“Outside of the localized economic impact, the Melbourne lockdown could hit consumer and business confidence outside of Victoria,” Williamson said.

“Any dent to confidence is a risk for the pace at which the hard data returns to normal.”