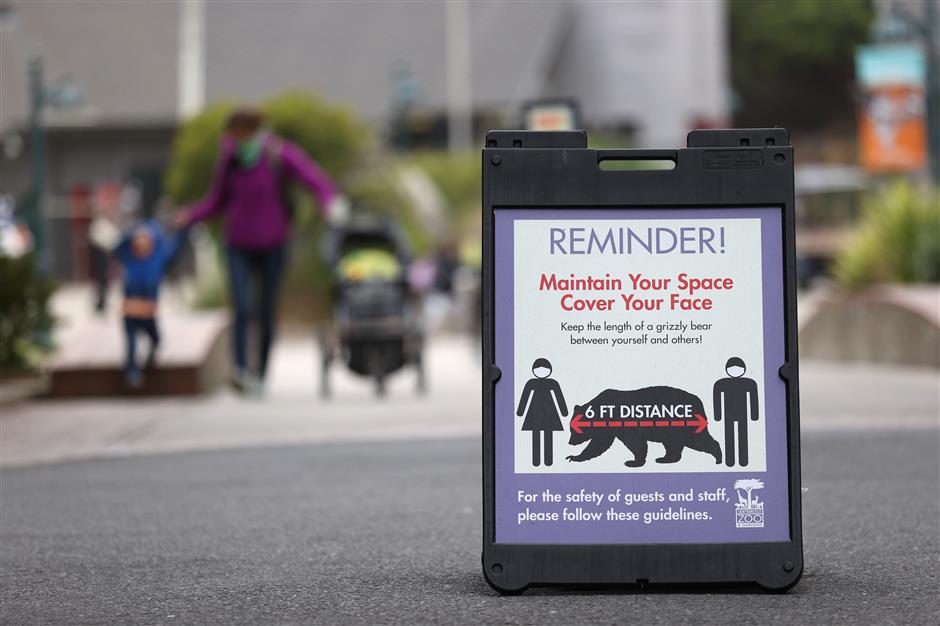 A sign encouraging social distancing is displayed at the San Francisco Zoo & Gardens on July 13 in San Francisco, California.

California drastically rolled back its reopening plans on Monday as novel coronavirus cases surged across dozens of US states and the World Health Organization warned that too many nations are mismanaging their pandemic response.

Governor Gavin Newsom ordered all indoor restaurants, bars and movie theaters to close again across California — by far America's richest and most populous state, with a larger economy than all but four countries.

Churches as well as gyms, shopping malls, hair salons and non-essential offices must also shut indoor operations in half of the Golden State's worst-hit and most densely populated counties, including Los Angeles.

"We're moving back into a modification mode of our original 'stay-at-home' order," said Newsom, whose state was the first to close down in March, but began easing restrictions in May.

The move came as California reported 8,358 new daily coronavirus cases, bringing its total to nearly 330,000 including more than 7,000 deaths.

Like the governors of Texas, Arizona and Florida — which were also hit hard in the virus' second spike — California initially declined to issue a statewide mask order and allowed counties to reopen indoor dining, gyms and bars.

With new infections spreading like wildfire globally, many countries were also reimposing restrictions on Monday, locking down towns and cities and reintroducing measures to halt the spread of the sickness.

But WHO chief Tedros Adhanom Ghebreyesus warned that too many countries were "headed in the wrong direction" with governments giving out mixed messages that were undermining trust.

"There will be no return to the 'old normal' for the foreseeable future," he said, warning that without governments adopting a comprehensive strategy, the situation would get "worse and worse and worse."

Since the start of July, nearly 2.5 million new infections have been registered across the globe, with the number of cases doubling over the past six weeks, according to an AFP tally based on official figures.

Latin America on Monday recorded the world's second-highest death toll, declaring a total of 144,758 deaths to pass the 144,023 recorded in the United States and Canada.

It now stands second only to Europe, where 202,505 people have died.

In Spain, regional officials were in a standoff with courts after a judge suspended a lockdown just hours after it was imposed on 160,000 people in the Catalonia city of Lerida following a sharp rise in cases.

Despite calls to respect the closure, many people were on the streets by mid-afternoon, with shops and bars still open, an AFP correspondent said.

It was the first such order given since Spain's lockdown ended on June 21.

At the weekend, US President Donald Trump wore a face mask in public for the first time, in the world's worst-hit country where some 135,000 people have died.

The neighboring state of Oregon banned indoor gatherings of more than 10 people — except at places of worship and businesses — and mandated outdoor face coverings where social distancing is not possible.

And virus epicenter Florida saw 12,624 new cases — the second-highest daily count recorded by any state, after its own record of 15,300 new COVID-19 cases a day earlier.

Across the border, Mexico became the country with the fourth-highest number of COVID-19 deaths in the world, climbing to a total of 35,006 and surpassing Italy.