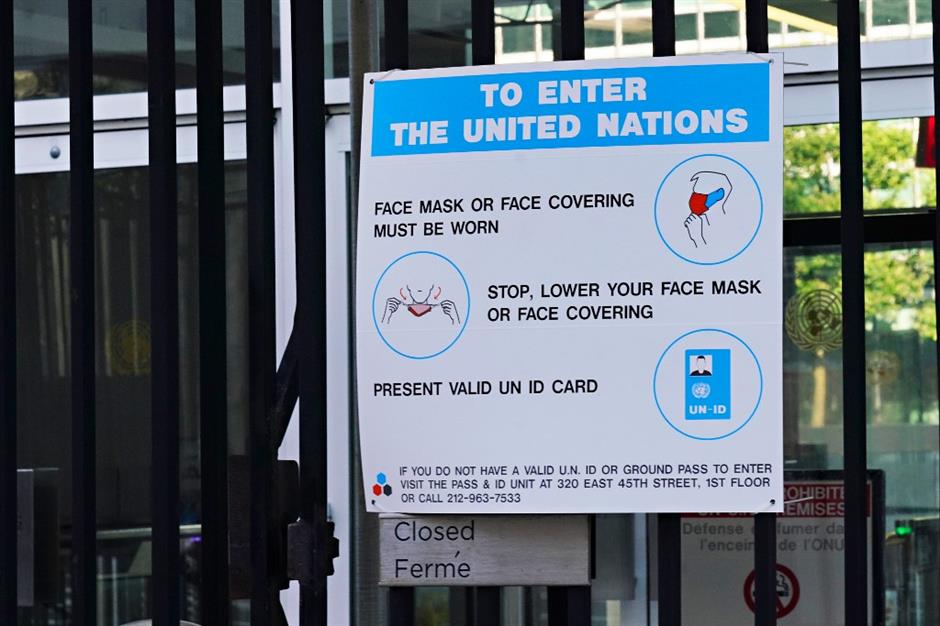 The United Nations displays a sign describing security identification with a mask protocol as New York City moves into Phase 3 of re-opening following restrictions imposed to curb the coronavirus pandemic on July 13, 2020.

The Security Council held an in-person meeting on Tuesday at UN Headquarters in New York, the first of its kind since mid-March when COVID-19 forced the council to convene virtually.

"In light of recent developments regarding the containment of COVID-19 in New York, the UN Security Council together has decided to begin a gradual and phased shift toward in-person meetings here at the UN Headquarters, of course, while ensuring all health precautions," Christoph Heusgen, the German UN ambassador, told reporters before he presided over the Security Council meeting.

The change of venue is obviously out of the need for social distancing. The Security Council Chamber, with a horseshoe-shaped table in the center, is less desirable for such a purpose.

Participants of Tuesday's meeting were seated sparsely in a large circle in the Economic and Social Council Chamber, with many of them wearing face masks, live video feed shows. Briefers who are currently not in New York delivered their statements via video teleconference.

Reporters were denied physical access to the Economic and Social Council Chamber. The restriction was "to minimize risk," said the UN Media Accreditation and Liaison Unit on Monday night.

Tuesday's meeting agenda was a heavy one. The council first adopted its annual report to the UN General Assembly before the adoption of two resolutions: one on the UN Mission to Support the Hodeidah Agreement, the other on youth and peace and security. The council then heard a briefing on the peace process in Colombia.

Heusgen, whose country holds the Security Council presidency for the month of July, said his delegation intends to have a few more in-person meetings before the end of July.

Heusgen said on Tuesday's in-person meeting was the result of a unanimous decision of the 15 members of the Security Council.

He said he would discuss with other council members after Tuesday's meeting to see whether further in-person meetings would be arranged.

Germany's position is that Security Council meetings should go gradually in this direction, he said. "We were pushing, as the presidency, for this. We have everybody on board. And now I want to see how colleagues react. We haven't made any concrete plans. But to give you a German response: yes, we would like to have a few more meetings before the end of our presidency here at the UN Headquarters."

Heusgen said virtual meetings cannot replace in-person diplomacy. But he added that the safety of everyone involved is a priority. "We will continue to be very careful," he said.

The Security Council began to convene via video teleconference in mid-March after restrictive measures were implemented at UN Headquarters in New York in response to the COVID-19 pandemic.

The last in-person meeting of the Security Council was held on March 12. After that it had to shift to interim procedures for the conduct of its business, including how meetings are convened and how resolutions are adopted. No interpretation between languages was made available in the meetings via video teleconference.

In Tuesday's in-person meeting, several representatives were pleasantly surprised by the fact that they could speak their mother tongue in interventions.