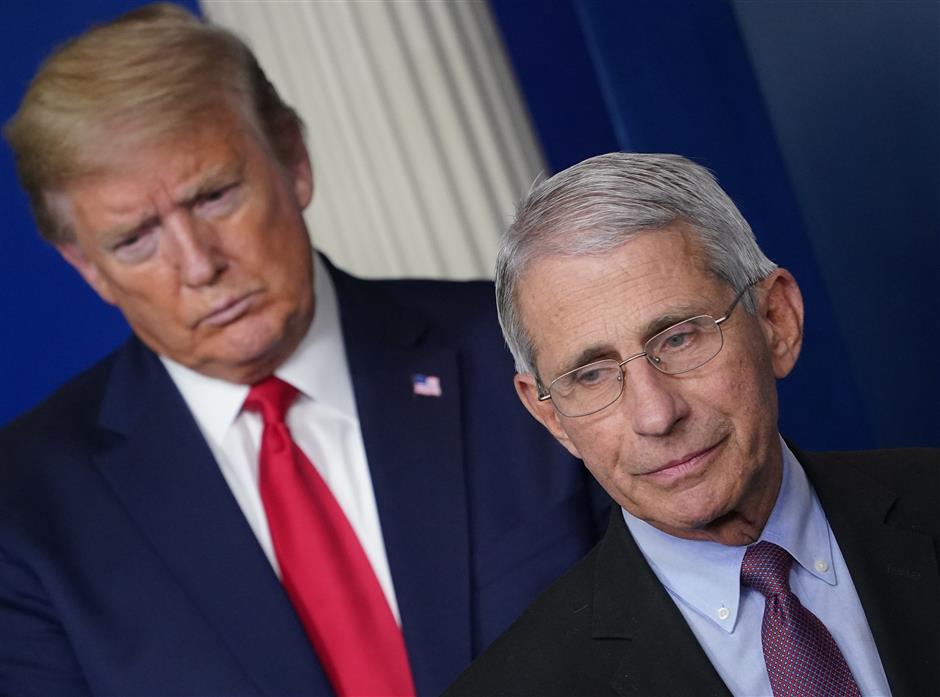 In this file photo taken on April 22, Director of the National Institute of Allergy and Infectious Diseases Anthony Fauci, flanked by US President Donald Trump, speaks during the daily briefing on the novel coronavirus at the White House in Washington, DC.

Anthony Fauci, the United States' top infectious disease specialist, likes to focus on science — but his honest takes on America's failures to get a grip on COVID-19 have brought him into ever greater conflict with President Donald Trump.

As director of the National Institute of Allergy and Infectious Diseases, the physician-scientist has led the country's response to every epidemic since the 1980s, earning particular acclaim for his research on HIV treatments.

These days, his public profile is bigger than ever, thanks to his straight-talking approach on the novel coronavirus that has won him legions of fans, who buy T-shirts and bobbleheads in his likeness.

Early on in the pandemic, the 79-year-old learned the delicate art of pushing back against the bluster of his boss without publicly contradicting him — on topics ranging from vaccine development timelines to Trump's puzzling faith in an unproven malaria drug to fight the virus.

There are increasing signs, however, that the diplomacy is starting to fray.

Fauci says he has not met the president since June 2, and he has not attended any recent televised briefings of the White House novel coronavirus task force that made him a household name.

His dire warnings on the dangers of reopening states too fast don't seem to sit well with the commander-in-chief, who has placed his reelection hopes on declaring victory over the virus and jumpstarting the economy.

The US, which is by far the worst-hit country in the world with more than 137,000 deaths, has since mid-June been experiencing a dramatic fresh surge, with the locus of the epidemic shifting to California, Texas, Arizona and Florida.

"As a country, when you compare us with other countries, I don't think you can say we're doing great," Fauci told the political news site FiveThirtyEight last week, days after warning the US could start seeing 100,000 new cases a day if it didn't correct its course.

Asked about the impact of the politicization of face masks, he replied: "I think you'd have to make the assumption that if there wasn't such divisiveness, that we would have a more coordinated approach."

US health officials adopted a pro-mask policy in the spring after new data shifted the balance of evidence in favor of their use.

Trump, however, has continued to equivocate on the issue, and has at various times sought to portray face coverings as an affront to freedom and a conspiracy to stoke fear.

Over the weekend, the White House hit back with a one-two punch, sending news media a memo purporting to demonstrate all the times Fauci "has been wrong on things" during the pandemic.

This was followed up by a scathing op-ed in USA Today by the president's trade adviser Peter Navarro, who wrote he only ever listened to Fauci's advice "with skepticism and caution."

Barred from doing TV interviews, Fauci has more than compensated by going on a print media and podcast blitz where he has taken on a more assertive tone.

"I think everybody thinks I'm doing more than an outstanding job," he told women's fashion magazine InStyle this week.

He also pointed out that, at least when it comes to his job at NIAID, where he is leading COVID-19 vaccine development efforts, the president cannot fire him.

The escalation of the conflict has fueled speculation the veteran medic may soon be shown the door by the president.

Trump, who is lagging in polls to former Vice President Joe Biden, needs to think through such a move carefully in case it backfires.

A Quinnipiac University survey published on Wednesday found that Fauci enjoys the trust of 65 percent of the American public, indicating broad bipartisan support.

And so, both sides have found ways to lower the temperature.

Fauci told The Atlantic the White House attacks were "bizarre," adding, cleverly: "When the staff let out something like that and the entire scientific and press community push back on it, it ultimately hurts the president."

Trump, for his part, took the out, telling reporters he and Fauci get along well and that his staff had acted on their own accord.

The fences are mended. For now.