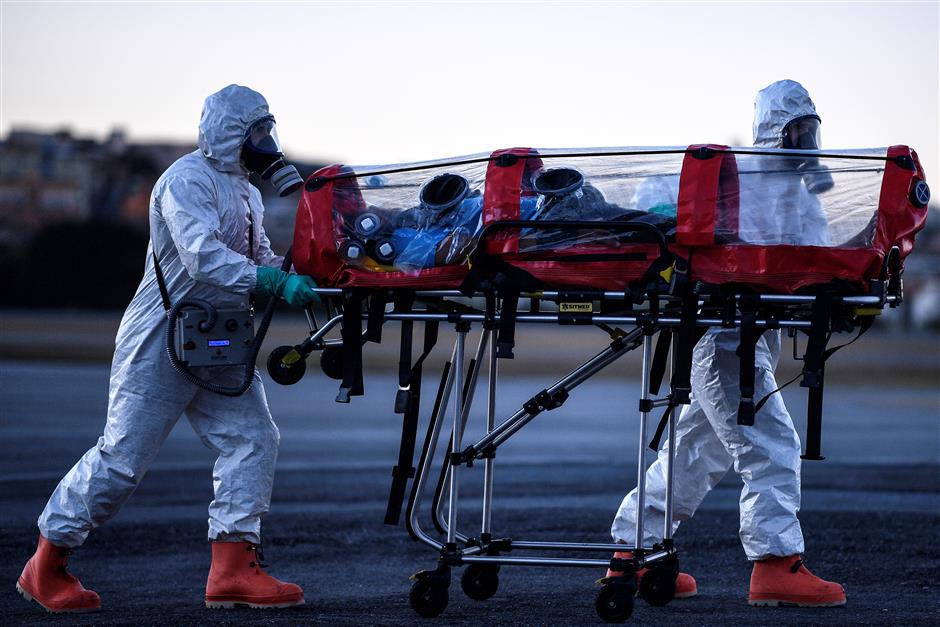 Members of the Military Firefighter Brigade of Minas Gerais wearing protective gear, demonstrate the use of an isolation stretcher, or bubble stretcher, to transport patients infected with coronavirus, at Pampulha Airport, in Belo Horizonte, state of Minas Gerais, Brazil, on Wednesday.

More than 4 million coronavirus cases have been recorded in Latin America and the Caribbean, half of them in Brazil, according to an AFP tally based on official figures.

The region passed the bleak milestone as Brazil reported a daily record of 67,860 new coronavirus cases on Wednesday.

Brazil alone has registered 2.2 million cases and 82,771 deaths, the second-biggest outbreak in the world after the United States.

Although many Latin American countries have begun relaxing stay-at-home measures, the virus is still spreading quickly across much of the region.

Peru, Mexico and Chile are also on the list of the top 10 countries by total cases, with well over 300,000 each.

Mexico’s death toll has surged to become the fourth-highest in the world, at 40,400.

The country surpassed Italy on Sunday, and now has more victims than anywhere but the United States, Brazil and Britain.

Brazil in particular has struggled to set a strategy. President Jair Bolsonaro faces criticism for downplaying the virus and attacking social distancing measures.

He has been in quarantine at the presidential palace since July 7 after contracting the virus himself. On Wednesday, he again tested positive.

Worldwide, the virus has infected more than 15 million people and killed nearly 625,000.