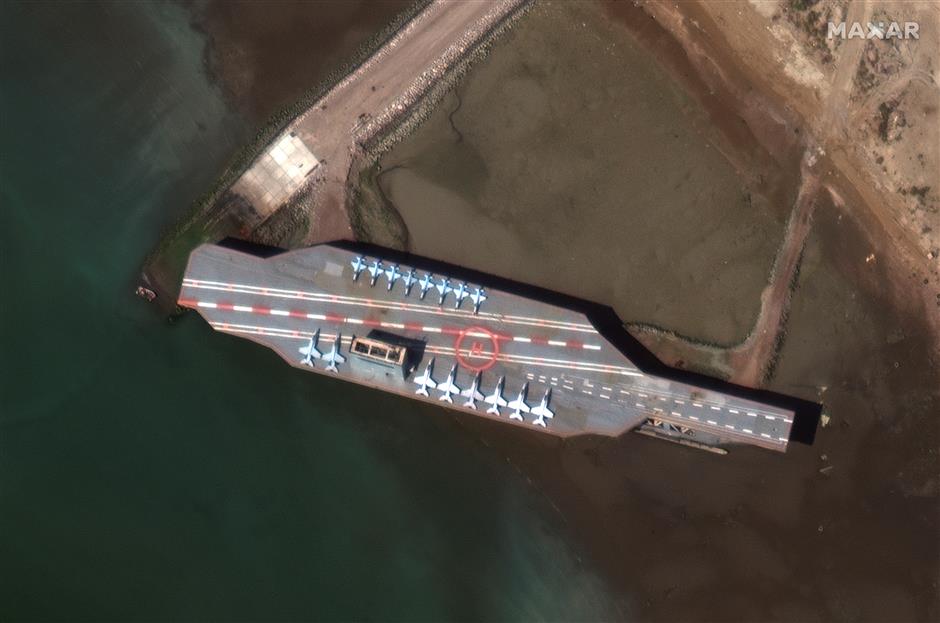 This handout satellite image from Monday shows a mock-up of a US aircraft carrier in Iran’s port of Bandar Abbas. Iranian Revolutionary Guards blasted the replica with missiles on Tuesday during military exercises in the Strait of Hormuz.

Iran’s Revolutionary Guard fired a missile from a helicopter targeting a mock-up US aircraft carrier in the strategic Strait of Hormuz, state television reported on Tuesday, an exercise aimed at threatening the US amid tensions between Tehran and Washington.

The drill, in a waterway through which 20 percent of all traded oil passes, underlines the lingering threat of military conflict between Iran and the US after last summer saw a series of incidents targeting oil tankers in the region.

Commandos fast-roped down from a helicopter onto the replica in the footage aired yesterday from the exercise called “Great Prophet 14.” Other footage showed fast boats encircling the mock-up, kicking up white waves in their wake.

Iranian troops also fired anti-aircraft batteries at a drone target in the exercise from a location that state television described as being near the port city of Bandar Abbas. Troops also fired missiles launched from trucks on land and fast boats at sea, as well as shoulder-fired missiles.

The Guard will use “long-range ballistic missiles with the ability to hit far-reaching aggressor floating targets” during the drill, said Abbas Nilforoushan, the Guard’s deputy commander for operations. That suggests the drill could see a repeat of 2015, when the Guard mock-sank a replica.

“Our policies to protect the vital interests of Iran are defensive, in the sense that we will not invade any country from the beginning, but we are completely aggressive in tactics and operations,” General Hossein Salami, the head of the Guard, was quoted as saying.

“What was shown today at this exercise at the level of aerospace and naval forces was all offensive.”