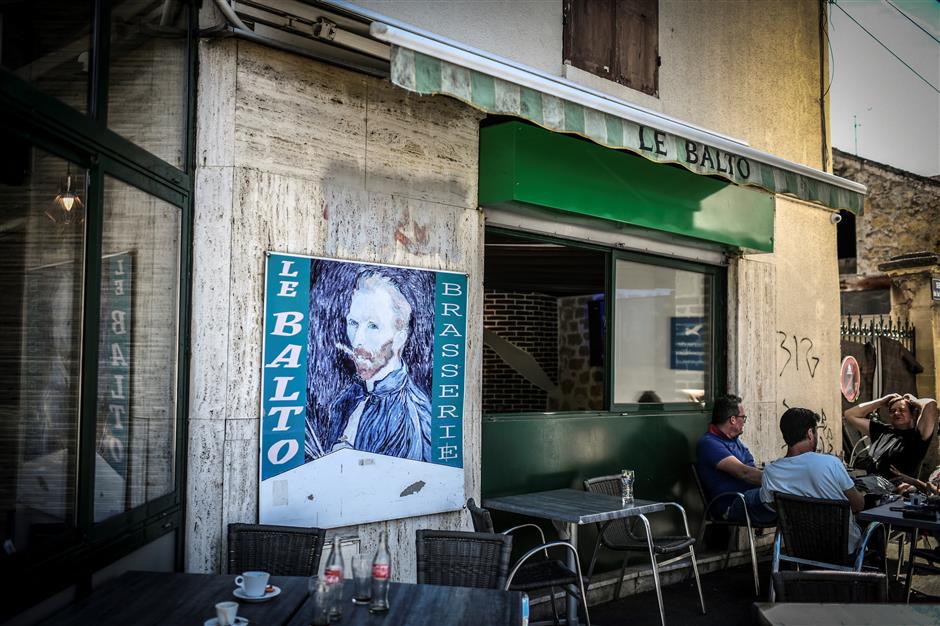 People have a drink at the terrace of Le Balto bar, past a portrait of Dutch painter Vincent Van Gogh on Wednesday, in Auvers-sur-Oise, where the artist is buried. Wednesday is the 130th anniversary of the death of post-Impressionist painter Van Gogh.

A researcher has claimed to have discovered the exact spot where Vincent Van Gogh painted his last canvas before his mysterious death from a gunshot wound.

The tortured Dutch artist had been working on “Tree Roots,” a jumble of brightly-colored tree trunks, roots and stumps near Auvers-sur-Oise, north of Paris, on a hot July day in 1890 when he staggered back wounded to the village inn.

Wouter van der Veen, of the Van Gogh Institute, which looks after the artist’s room at the Auberge Ravoux where he spent his final 70 days, said most of the tangle of roots is still there, a stone’s throw from the inn.

Experts at the Van Gogh Museum in Amsterdam have backed the finding, saying it was “an interpretation, but it looks like indeed it is true.”

The museum’s director Emilie Gordenker and the great grandson of Van Gogh’s younger brother Theo traveled to the village on Tuesday to unveil a plaque at the spot.

Both Vincent and Theo, who had supported Van Gogh for much of his life and outlived him by just six months, are buried next to each other in the village cemetery.

Van der Veen said that he made the breakthrough from a postcard of the village from the turn of the 20th century, which shows an embankment with the trees on the main road through the hamlet, 30 kilometers north of Paris.

He was going through some documents during the coronavirus lockdown when “my eye was caught by a detail from the postcard.”

He compared it with the painting and found that the trunks and roots corresponded.

“Discovering the place where Van Gogh painted his last and most mysterious work is a waking dream which I am still trying to comprehend,” the researcher added.

Teio Meedendorp, of the Van Gogh Museum, said that Van Gogh would have often passed the spot “going out to the fields behind the chateau of Auvers where he painted in the last week of his life.”

Because of the way the light falls in the painting, Van der Veen said Van Gogh was probably still working on it late in the afternoon, “about 5pm or 6pm.”

This, he argued, could help disprove the controversial theory that Van Gogh had not killed himself but had got drunk and fought with two local boys who shot him by accident.

The theory was first floated in a biography of the painter by the Pulitzer Prize-winning authors Steven Naifeh and Gregory White Smith nine years ago, and featured in the 2018 movie “At Eternity’s Gate” starring Willem Dafoe.

Its director, American painter Julian Schnabel, said when the film was released that Van Gogh was probably murdered.

He insisted a man who had painted 75 canvases in almost as many days was unlikely to be suicidal.