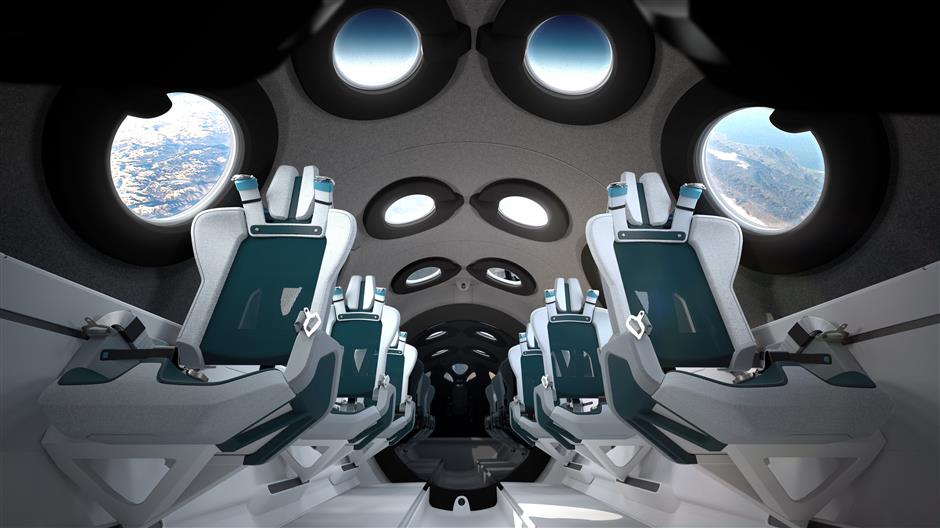 The Virgin Galactic spaceship that will some day carry very moneyed tourists boasts windows and cameras galore for easy selfies with planet Earth.

The company, founded by British billionaire Richard Branson, provided a virtual tour on Tuesday of the inside of the ship that will transport people willing to pay hundreds of thousands of dollars for a brief taste of being at the edge of space.

Besides all the windows and cameras, the craft will have a mirror in the back of the cabin so people can admire themselves.

There is no firm date for the first commercial flight and the company has repeatedly pushed it back, but executives said recently it is a question of months and not years away.

Several test flights must still be made before Branson himself steps aboard.

The inside of the cabin, which will have seats for six passengers and a two-member crew, will feature 12 windows and 16 cameras. It is designed to give the best possible view of our planet.

An AFP reporter made a remote tour of the spacecraft with a virtual reality headset provided by the company. Each seat is close to a large oval-shaped porthole, and a camera is attached to each window in such a way that passengers can be photographed with Earth behind them, with no need to take a selfie of their own.

The travelers can unbuckle their seatbelts and float. Portholes in the ceiling will give them a spectacular view of the blue planet standing out against a jet black sky.

So far, 600 people who have paid up to US$250,000 — Virgin Galactic calls them “future astronauts” — have been waiting for years to take their seat.

Its development has been delayed by a devastating crash of the first one in 2014 due to a pilot error.

The spacecraft will be taken up by a special plane and released in high altitude. Seconds later, the spaceship — part plane, part rocket — will ignite its engine and blast upward with an acceleration of 3.5G, three and a half times that of Earth’s gravitational force.