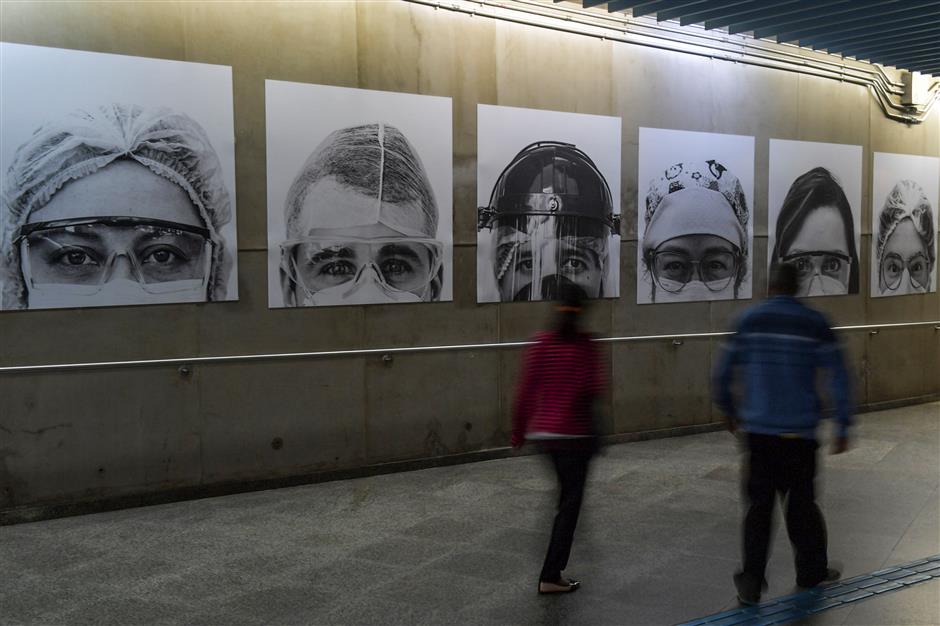 A couple walks past photos of medical workers by Brazilian photographer Thiago Santos at a subway station in Sao Paulo, Brazil, on July 29.

Brazil reopened on Wednesday to foreign visitors arriving by plane, hoping to revive its lockdown-devastated tourism industry despite the rapid spread of the new coronavirus in the country.

In a decree published in the government gazette, Brazil extended coronavirus-related bans on foreign travelers arriving by land or sea for another 30 days, but said the four-month-old restrictions "will no longer bar the entry of foreigners arriving by air."

The move came even as Brazil registered record numbers of daily infections and deaths, bringing the overall figures past 2.5 million and 90,000, respectively.

Brazil closed its air borders to non-residents on March 30, at a time when the virus was ravaging Europe and Asia and just taking hold in South America.

Now, Brazil is the country with the second-highest number of infections and deaths in the world, after the United States.

The tourism industry has already lost nearly 122 billion reals (US$23.6 billion) because of the pandemic, the National Confederation of Trade in Goods, Services and Tourism (CNC) estimates.

As a whole, Latin America's biggest economy is facing a record contraction of 9.1 percent this year, according to the International Monetary Fund.

Under the measure, Brazil will require foreign visitors staying for 90 days or less to have health insurance covering them in the country before they travel.

Brazil for its part is among the countries whose nationals still face bans on entering the European Union or the United States under novel coronavirus restrictions.