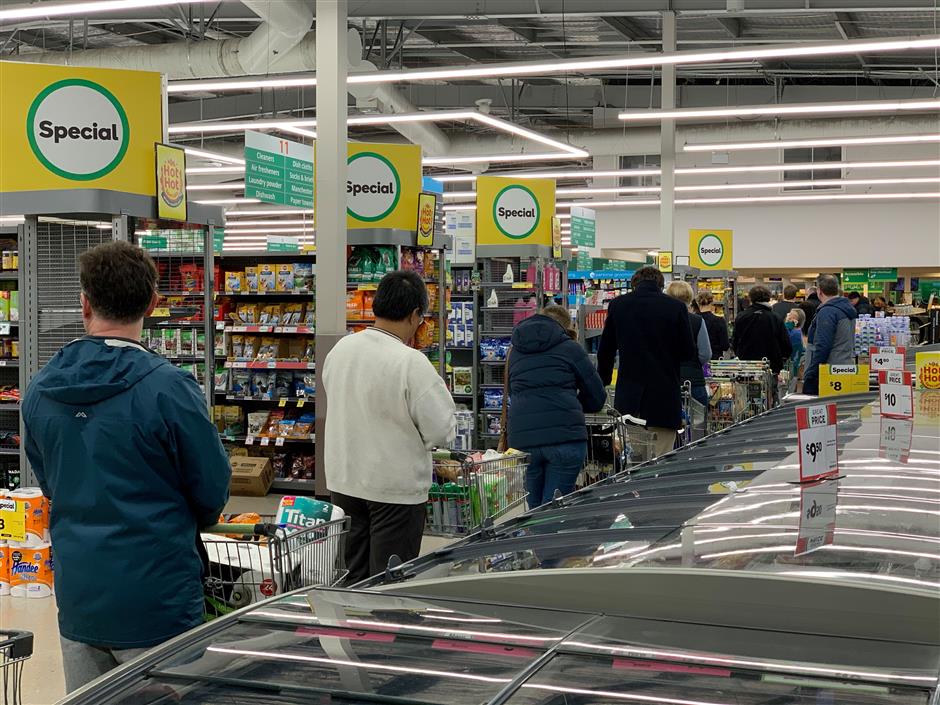 Shoppers line up at a supermarket in the suburb of Johnsonville in Wellington, New Zealand, on Tuesday. Auckland has been ordered a level-3 lockdown and the rest of the country has moved to level-2 alert after a family tested positive for the coronavirus.

New Zealand said on Tuesday it was shutting down its largest city, Auckland, after four new cases of COVID-19 in the city, the first evidence of domestic transmission after being coronavirus-free for 102 days.

New Zealand’s successful fight against COVID-19 was hailed globally and the Pacific island nation of 5 million was seen as one of the safest places, as the pandemic raged globally.

Director General of Health Ashley Bloomfield said the four confirmed cases were within one family in South Auckland. They had no history of international travel. Family members have been tested and contact tracing is under way.

News of the cases sent panic across the country with media reporting people rushing to supermarkets to stock up, and businesses preparing to shut.

Prime Minister Jacinda Ardern said Auckland would move to level-3 restriction from Wednesday’s noon as a “precautionary approach,” which would mean people should stay away from work and school, and gatherings or more than 10 people would again be restricted.

The restrictions would be applied for three days until Friday, which she said would be enough time to assess the situation, gather information and make sure there was widespread contact tracing.

“This is something we have prepared for,” Ardern said in a news conference, adding that the increased caution was because the source of the virus was unknown.

“We have had a 102 days and it was easy to feel New Zealand was out of the woods. No country has gone as far as we did without having a resurgence. And because we were the only ones, we had to plan. And we have planned,” she said.

New Zealand is set to vote in a national election on September 19. Ardern said she has not given any consideration to the impact of the new restrictions on the polls at this stage.

Travel into Auckland, on the North Island, would be restricted for non residents, she said.

Auckland Mayor Phil Goff said in a statement: “I am urging Aucklanders to come together like we did last time to stamp out community transmission. Please remain calm, please do not panic buy and please follow the lockdown rules.”

Ardern also said the rest of New Zealand was entering level-2 alert from midday today for three days. This would mean social-distancing measures would be applied again and mass gatherings would be limited to 100 people.

New Zealand was placed under a tight lockdown for weeks after reported its first known case on February 26 and the last case of community transmission was detected on May 1. Ardern had declared the virus had been eliminated from the community.