US facing an 'epic catastrophe' of evictions and homelessness 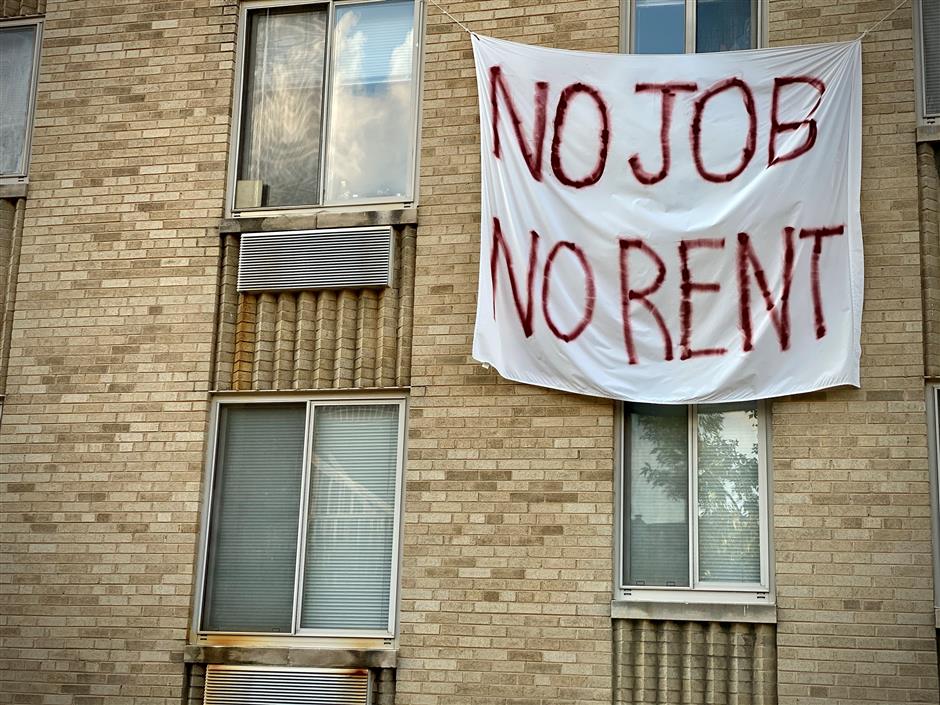 In this file photo taken on August 9, 2020, a banner against renters eviction reading is displayed on a controlled rent building in Washington, DC.

Activists and relief groups in the United States are scrambling to head off a monumental wave of evictions nationwide, as the coronavirus crisis leaves tens of millions at risk of homelessness.

The jobs catastrophe sparked by the global health emergency and the tepid rebound in the world’s largest economy have left Americans struggling to pay rent and vulnerable to eviction.

Hopes for relief in the form of a fresh aid package from Washington were dashed as partisan bickering scuppered the latest negotiations.

The housing crisis is “already a tsunami,” said Bambie Hayes-Brown of Georgia Advancing Communities Together, a coalition of non-profit housing and community development groups.

“We got some funding from the United Way and we went through it so fast. We were just inundated.”

Mariatou Diallo, who lives in New York, has not paid her rent since March, when her work in the health care industry dried up. The future frightens her.

“Right now, I’m very worried because I have an child and if I’m evicted, I don’t know what I’m going to do,” she said at a rally for rent relief in the Bronx.

Weekly census data shows that more than 30 percent of renters in the United States have no or “slight” confidence in their ability to pay rent next month.

The Aspen Institute estimated as many as 40 million people could be at risk of eviction in the coming months, leading to “destabilization of communities” across the country.

Landlords have filed for nearly 35,000 evictions during the pandemic in 17 cities tracked by the Eviction Lab at Princeton University, although 10 of those cities are blocking the move.

In some cases, renters have fallen months behind, but the crisis is only coming to a head now because eviction moratorium orders in several states have expired.

In addition, housing courts have reopened after being shuttered for months due to restrictions to curb the spread of the coronavirus.

Another factor is the ending on July 31 of federal unemployment benefits that provided US$600 a week to workers laid off due to the pandemic.

“Without the US$600, nobody can pay the rent,” said Yudy Ramirez, who lost her job as a housekeeper at a Manhattan hotel in March.

Ramirez, 46, has not made payments for July or August on her apartment in the Bronx, which costs US$1,100 a month. She has no news about possibly returning to her old job, and her health insurance benefits are about to lapse.

The prospect of eviction looms especially threatening in working class, non-white neighborhoods like the Bronx, which have suffered more deaths from COVID-19 and experienced disproportionate job losses.

About 50 people from the neighborhood including Diallo and Ramirez joined Monday’s protest outside the Bronx Housing Court.

“It’s a pandemic — moratorium now!” They chanted in English and Spanish, demanding that New York Governor Andrew Cuomo back legislation to forgive rent.

John Pollock, coordinator of the National Coalition for a Civil Right to Counsel, said the US is facing an “epic catastrophe” on evictions, but that the situation could be mitigated by a fiscal package from Washington.

The Democratic bill includes US$100 billion in rent relief, as well as an extension of unemployment benefits. But the Republicans balked at the deal.