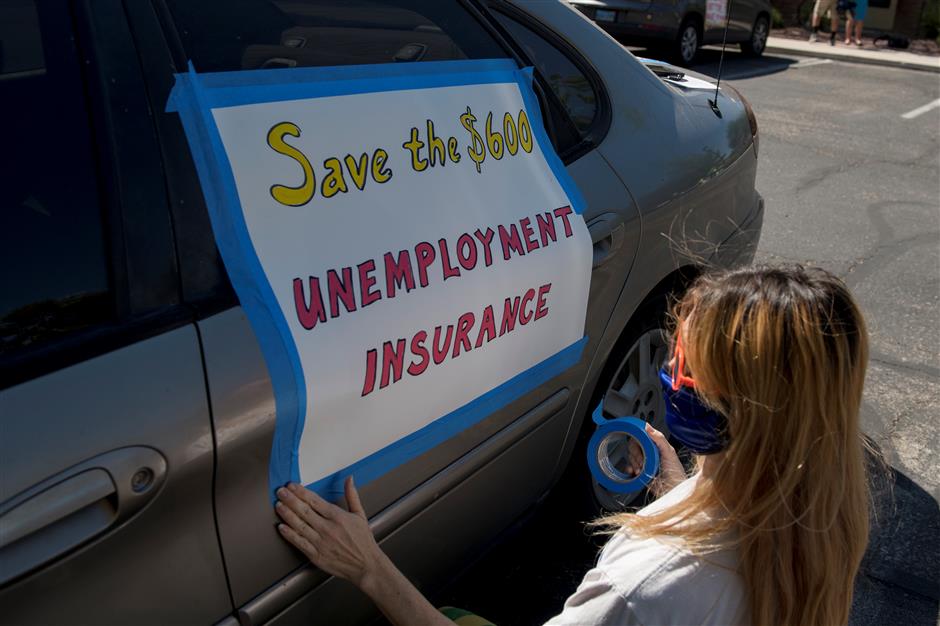 In this file photo taken on August 6, 2020, Francis Stallings tapes a sign to her car before participating in a caravan rally on the Las Vegas Strip in support of extending the US$600 unemployment benefit, in Las Vegas, Nevada.

The number of Americans seeking unemployment benefits dropped below 1 million last week for the first time since the start of the COVID-19 pandemic in the United States, likely as the expiration of a US$600 weekly jobless supplement discouraged people from filing claims.

Initial claims for state unemployment benefits totaled a seasonally adjusted 963,000 for the week ended August 8, compared to 1.191 million the previous week, the Labor Department said on Thursday. That was the lowest level since mid-March when authorities started shutting down non-essential business to slow the spread of coronavirus.

The extra unemployment benefit lapsed on July 31. President Donald Trump on Saturday signed an executive order, including extending the supplement, though he reduced the weekly payout to US$400. But there has been confusion over the order.

States are required to cover US$100 of the benefits, but governors have indicated they don’t have the money after revenues were hit by the pandemic.

The remaining US$300 will be funded from a limited emergency disaster relief program, which economists estimated could be depleted as early as September.

White House Economic Adviser Larry Kudlow said Trump’s plan would provide an extra US$300 per week. Industry groups and Republicans said the US$600 supplement was encouraging some unemployed to stay home.

Many economists rejected the argument and credited the supplement for the economy’s nascent recovery from a recession triggered by the coronavirus. A government-funded program offering businesses loans to help with wages has also lapsed.

New COVID-19 infections are spreading across the nation, forcing authorities in some hotspots to either shut businesses again or delay reopenings.