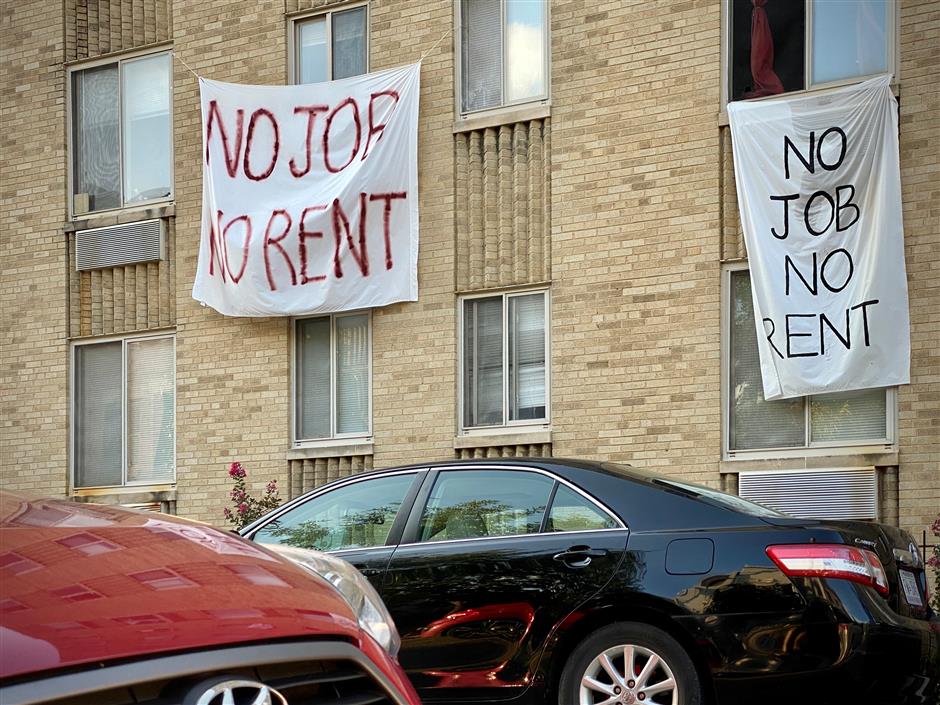 Banners against renters eviction reading “no job, no rent” is displayed on a controlled rent building in Washington, DC, on August 9, 2020.

US President Donald Trump on Friday pushed for more COVID-19 relief to households and small businesses after congressional lawmakers left Washington DC with no deal in sight.

"I have directed the Secretary of the Treasury to get ready and send direct payments of $3400 for a family of four to all Americans, Democrats are holding this up," Trump said at a press conference, adding he is also ready to send more money to help small businesses hurt by the pandemic, and state and local governments.

Asked by reporters whether he would take unilateral action on these issues or wait for the legislative package, Trump responded: "I'm waiting for the Democrats to approve it, okay?"

Both chambers of Congress have left for their August recesses and are not expected to return until September unless they strike a COVID-19 relief deal.

Negotiations between Democratic leaders and White House officials collapsed last week, with both sides blaming each other for making little progress on the much-needed relief package.

In an attempt to circumvent Congress, Trump last Saturday signed a series of executive orders to extend certain COVID-19 economic relief, but they are unlikely to provide a meaningful boost to the overall economy.

"A closer look at these orders suggests they will have at best marginal economic benefits even if fully implemented, which is questionable given the legality of the orders and the likely court challenges," Mark Zandi, chief economist of Moody's Analytics, wrote in an analysis earlier this week.

Zandi estimated that these orders could provide just over US$400 billion in total relief, but the US economy needs a fiscal aid package costing at least US$1.5 trillion to avoid falling back into recession, based on simulations of Moody's macroeconomic model.

After rebounding strongly in May and June, US economic activity has begun to slow since July as some states have paused their reopening plans or re-imposed restrictions on some activities due to the resurgence of COVID-19 cases.

"The resurgence in COVID-19 cases and subsequent pullback in activity have already begun. Delays to aid by Congress will exacerbate the slowdown in August," said Diane Swonk, chief economist at Grant Thornton, a major accounting firm.