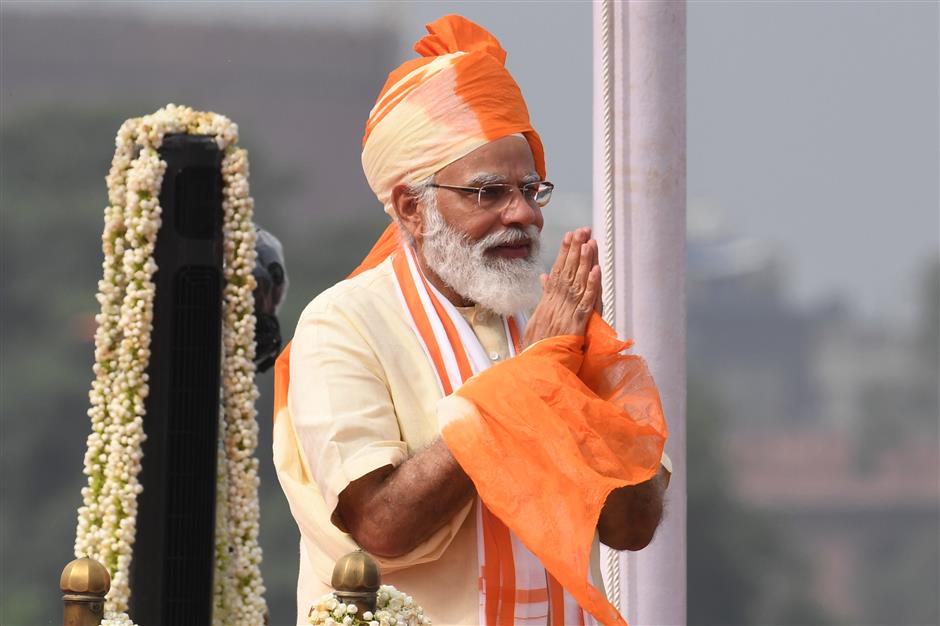 India's Prime Minister Narendra Modi gestures after his speech to the nation during a ceremony to celebrate India's 74th Independence Day at the Red Fort in New Delhi on August 15, 2020.

Indian Prime Minister Narendra Modi on Saturday said that as many three COVID-19 vaccines are in different stages of trials in the country, and once they are finally produced, India will ramp up infrastructure for mass production of the vaccines.

Addressing the nation on the occasion of the 74th Independence Day from the ramparts of Red Fort, a historic monument in Delhi, Modi expressed hopes that the country will win the fight against the virus.

"Our roadmap to bring Corona vaccine to all Indians in shortest possible time is ready," said Modi in his Independence Day speech.

The prime minister also said that a self-reliant India is the need of the hour, and that it would soon turn into a reality.

Announcing the Digital Health Mission, Modi said a health identity card would be given to every citizen. This is a step towards providing health facilities for one and all even in the remotest areas of the country.

In another ambitious project, he said that as many as 600,000 villages would be connected through optical fibre in the next 1,000 days.

In another important announcement, Modi said that the National Infrastructure Pipeline Project would be undertaken with the investment of 1.10 lakh crore Indian Rupees (US$15.7 billion).