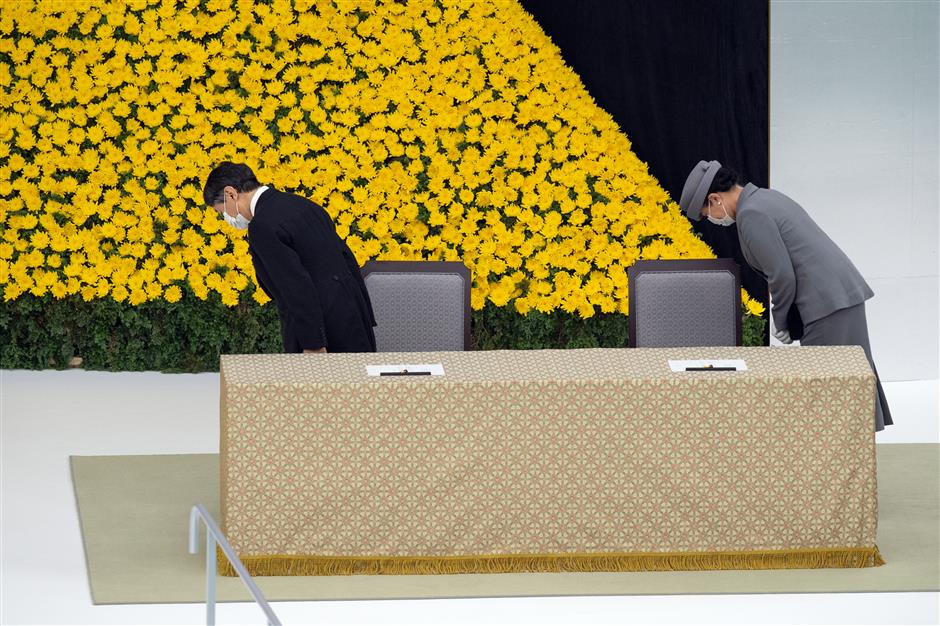 japan's Emperor Naruhito and Empress Masako bow as they attend a memorial service marking the 75th anniversary of Japan's surrender in World War II at the Nippon Budokan hall in Tokyo on August 15, 2020.

Japan on Saturday commemorated the 75th anniversary of its surrender in World War II, with Emperor Naruhito expressing his "deep remorse" over Japan's wartime actions at an annual mourning ceremony in Tokyo.

The emperor and empress, Japanese Prime Minister Shinzo Abe and a limited number of people attended the ceremony which was scaled back due to the COVID-19 outbreak.

Naruhito, the country's first emperor born after the war, expressed "deep remorse" as he did last year, in a rare public appearance amid the pandemic with his wife Empress Masako.

"Looking back on the long period of postwar peace, reflecting on our past and bearing in mind the feelings of deep remorse, I earnestly hope that the ravages of war will never again be repeated," Emperor Naruhito said in his address at the annual memorial service.

"We will never forget that the peace and prosperity we are enjoying today are built on the ultimate sacrifices of the war dead," Abe said in his address, vowing not to repeat the tragedy of the war.

Abe, who is eager to revise the postwar pacifist Constitution, did not refer to Japan's wartime aggression.

The ceremony was held in Nippon Budokan, with around 540 people attending, less than 10 percent of the number in 2019 and the lowest on record since the government started holding the event in 1963, according to the Ministry of Health, Labor and Welfare.

Members of Abe's Cabinet on Saturday visited Yasukuni shrine, a symbol of Japan's past militarism, while Abe himself sent a ritual offering.

Environment Minister Shinjiro Koizumi was the first Cabinet member since 2016 to visit the shrine on the August 15 anniversary. His visit was followed by three other Cabinet members.

Visits and ritual offerings made in person or by proxy to the infamous shrine by Japanese leaders and officials have consistently sparked strong criticism and hurt the feelings of people of China, South Korea and other countries brutalized by Japan during the war.

Japan brutally occupied many parts of Asia before and during World War II, causing untold suffering and death to hundreds of thousands of innocent victims.

There were numerous more heinous incidents carried out by the Japanese army, that until this day, have received far less coverage in educational textbooks, or in globally televised memorial services.