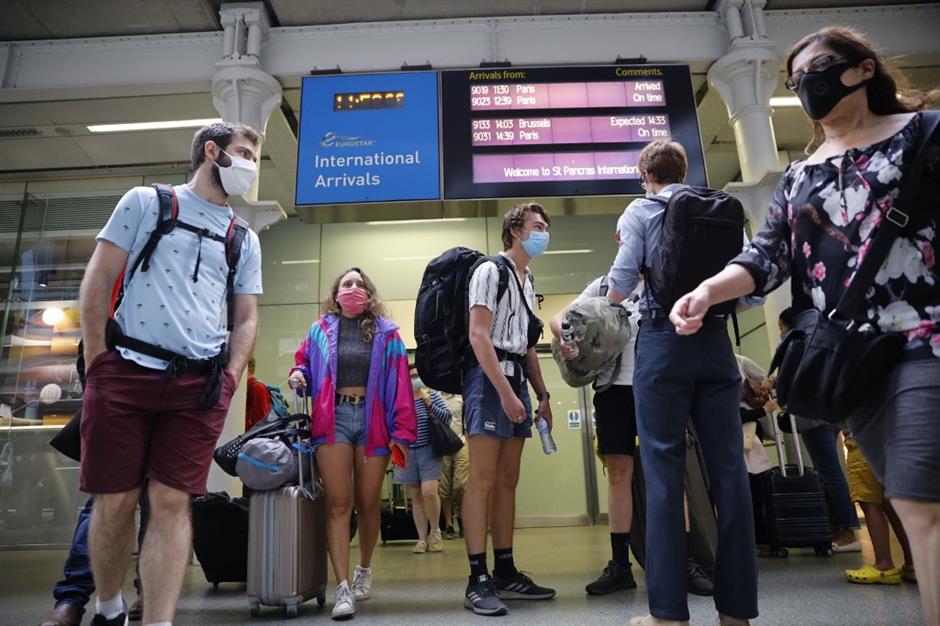 Passengers wearing facemasks as a precaution against the spread of the novel coronavirus walk through arrivals onto the main concourse at St Pancras International station in London on August 14, 2020 after travelling to London on a Eurostar train from Paris. Britain said it will reimpose quarantine from tomorrow for travellers from France and the Netherlands following a rise in coronavirus cases in those countries.

British travellers returning home from parts of Europe and beyond began quarantine under new restrictions on Saturday, while Russia said it had produced the first batch of its controversial coronavirus vaccine.

"The reopening of the Christ (monument) symbolizes the reopening of Brazil to tourism," Environment Minister Ricardo Salles said at a ceremony at the base of the statue, where visitors will have to wear masks and socially distance.

The United States is the worst-affected country with more than a quarter of the world's 21 million cases, as well as nearly 170,000 deaths. Brazil follows with 3.3 million cases and 107,000 deaths.

The UK removed France, the Netherlands, Malta and three other countries from its list of places exempt from self-isolation rules, as a second wave of virus infections threatens more disruption and economic chaos in Europe.

The move, announced late Thursday, sparked a 36-hour scramble for plane, train and ferry tickets among some Britons desperate to get back home before the 4:00 am (0300 GMT) rule change.

All arrivals from the blacklisted states after the deadline must self-quarantine for 14 days, with the measure already in place for people coming from several other countries including Spain and Belgium.

France is facing a resurgence of the disease that emerged in China late last year.

French authorities have reported more than 2,500 new cases on each of the past four days and over 3,000 on Saturday — levels not seen since France was in a strict lockdown in the spring.

With cases still rising around the world, Moscow said the first consignments of its "Sputnik" vaccine had been produced, just four days after President Vladimir Putin announced Russia had won the global race to approve a vaccine.

The claim has drawn a sceptical response from Western scientists and the World Health Organization, which have said the vaccine still needs a rigorous review.

Germany added most of Spain — where cases have surged in recent weeks — to its list of regions from where arrivals must show a negative COVID-19 test or quarantine for two weeks.

The restrictions include the island of Mallorca, a highly popular resort for German sunseekers.

Malta meanwhile posted its highest ever one-day rise in coronavirus cases on Saturday with 72 new infections.

In Asia, South Korea tightened restrictions in Seoul and its surrounding areas as the country reported the highest number of new daily infections since March.

However several countries announced an easing of lockdown measures.

South Africa said it would resume sales of alcohol and cigarettes — banned on March 27 — on Monday. DR Congo opened up its airspace Saturday after five months with a flight from Kinshasa taking off for the Ethiopian capital Addis Ababa.

In the US, museums, art galleries and other cultural institutions in New York will be allowed to reopen later this month following a five-month shutdown.

"It's weird. There aren't many people this year," said Michel Clavel, a retired 66-year-old truck driver, who comes every year for the pilgrimage which usually attracts about 250,000 worshippers.