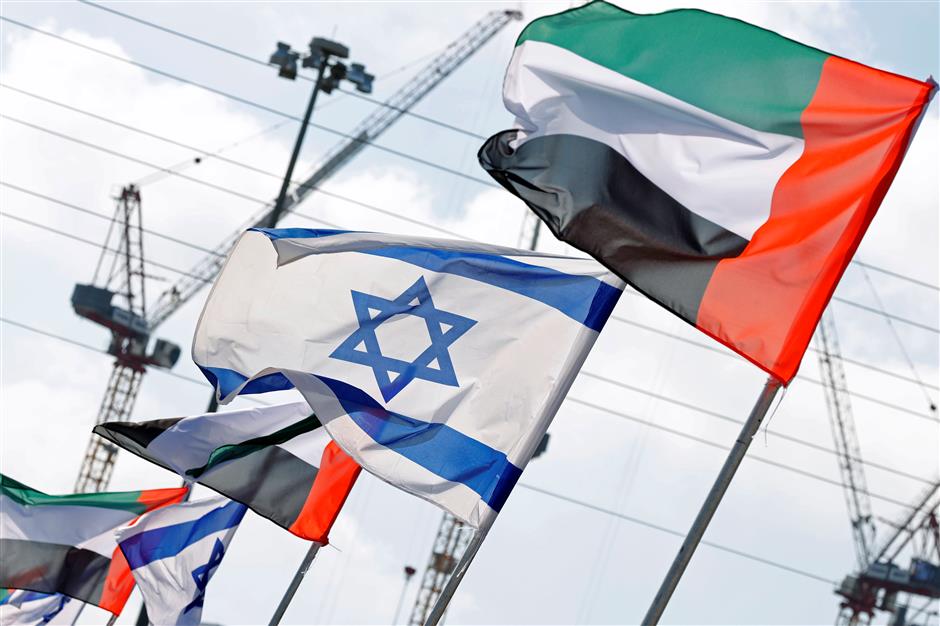 Israeli and United Arab Emirates flags line a road in the Israeli coastal city of Netanya, on Sunday.

From cries of “betrayal” to fears about “falling dominoes,” the deal making the United Arab Emirates to forge ties with Israel stirred anger and dismay around the Middle East, but a cautious welcome from the UAE’s Gulf allies.

The mixed response highlighted new fault lines in a region where fear and distrust of Iran — shared by Israel and some Arab states — has challenged a decades-old allegiance to the Palestinian issue as a major driver of Arab policy.

Palestinians, who want to establish a state on West Bank territory captured by Israel in 1967, denounced the agreement as a betrayal of the long-held Arab stance that peace should be conditional on Israeli withdrawal from occupied territory.

The agreement, which is set to make the UAE only the third Arab state after Egypt and Jordan to make peace with Israel, calls for a temporary suspension of Israel’s planned annexation of occupied West Bank territory, but not withdrawal.

The deal, which US President Donald Trump helped broker with support from senior adviser Jared Kushner, forms a new axis with the UAE aligning itself with Israel in confronting Shiite Muslim Iran and Sunni Islamist radicals in the region.

This is likely to heighten tensions in the Gulf, which has in the past two years seen attacks on tankers and energy assets that the United States and Saudi Arabia have blamed on Iran, a charge Tehran denies.

Iran’s foreign minister said the deal aimed to hand Trump a win ahead of US elections in November, a view echoed by the leader of Lebanon’s Iranian-backed Hezbollah movement.

“It’s shameful what Abu Dhabi did ... They don’t see Israel as an enemy, but an ally and what’s happening now is to help Trump in the elections,” Iranian Foreign Minister Mohammad Javad Zarif said.

“It is good, though painful, that the masks have fallen,” he said.