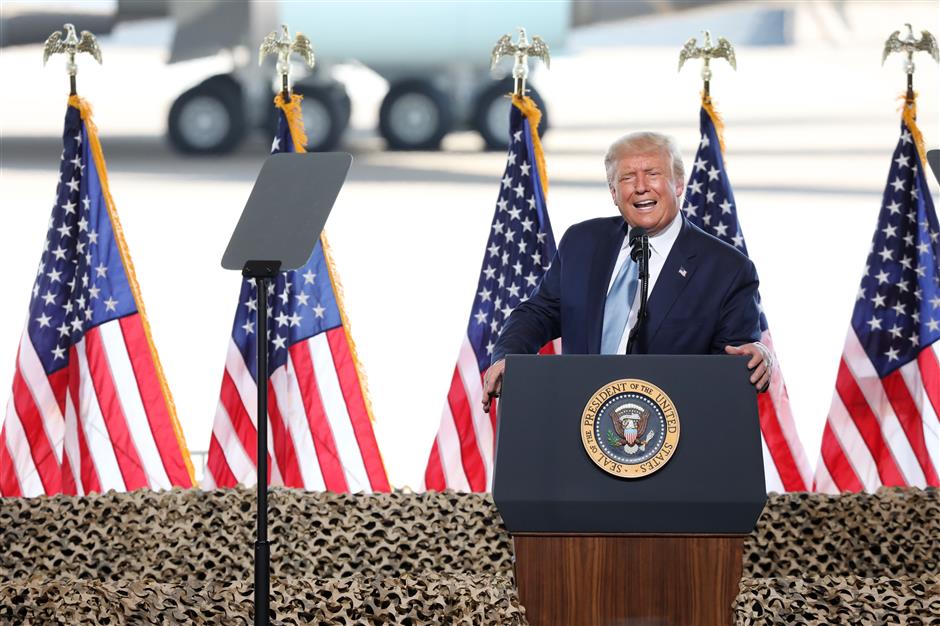 US President Donald Trump speaks during a campaign rally at the Defense Contractor Complex on August 18 in Yuma, Arizona.

US President Donald Trump said on Tuesday he would accept his party's reelection nomination from the White House next week, as his Democratic opponents intensified their attacks on his chaotic presidency and touted Joe Biden as the must-elect replacement.

Trump made the revelation as the Democratic National Convention gathered for its second day, with two ex-presidents preparing to unleash their own arguments against the White House incumbent.

The lineup features Jimmy Carter, who served one term from 1977, and 1990s commander-in-chief Bill Clinton, who will say the Trump White House is swirling with chaos instead of the competence necessary to address the nation's crises.

"At a time like this, the Oval Office should be a command center. Instead, it's a storm center. There's only chaos," Clinton said in speech excerpts released by convention organizers.

"Just one thing never changes — his determination to deny responsibility and shift the blame," Clinton said. "The buck never stops there."

Democrats are gathering virtually over four days to formally nominate Biden and showcase why their candidate should replace Trump.

The president faced a barrage of criticism on opening night, most notably from former First Lady Michelle Obama who said Trump lacks the character and skills for the job.

"I thought it was a very divisive speech, extremely divisive," Trump told reporters at the White House.

"Thursday night I'm doing it live," Trump said, referring to his speech next week when he formally accepts his party's nomination at the Republican convention, which has also shifted online.

Trump said he has chosen the White House South Lawn as the location, after saying in recent weeks that he would pick between the presidential mansion and the historic battlefield at Gettysburg.

Delivering such an obviously political speech from the White House will stir substantial controversy, as presidents are required to separate their campaigning from taxpayer-funded governing.

In addition to Clinton and Carter, Tuesday's Democratic lineup will feature Jill Biden, who has been married to the candidate since 1977.

The educator from Pennsylvania, who served eight years as second lady, has campaigned at length for Biden, repeatedly speaking of his values and commitment to everyday Americans.

She will deliver a personal, high-stakes prime-time testimonial about her husband, including how the personal tragedy of the death of his first wife and daughter in a 1972 car crash has shaped him.

"How do you make a broken family whole?" she will say. "The same way you make a nation whole. With love and understanding — and with small acts of compassion. With bravery. With unwavering faith."

The camp is promoting Joe Biden as a unifier. In their appeal to middle-of-the-road voters and frustrated Republicans, the convention will feature a video of the unlikely friendship between Biden and late Republican senator John McCain, narrated by his widow Cindy McCain.

Republican former Secretary of State Colin Powell is also reportedly set to deliver videotaped remarks in which he endorses Biden.

But the convention is also about unifying Democratic factions, and to that end New York Representative Alexandria Ocasio-Cortez, a rising star in the progressive wing of the party, is speaking.