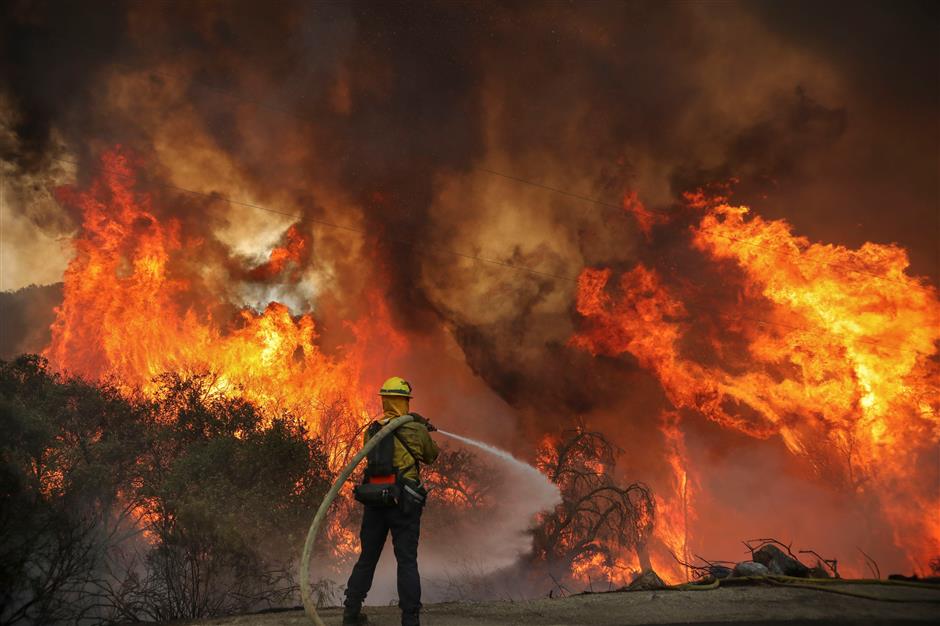 More than 200 people were airlifted to safety in California on the weekend after a fast-moving wildfire cut off the only road out of the Mammoth Pool Reservoir, a popular recreational site in the state’s Sierra National Forest.

Twenty evacuees were taken to hospitals, as the Creek Fire that started on Friday night rapidly grew to burn about 18,210 hectares, forcing evacuations and road closures in the Fresno area in central California.

“We’re completely trapped. There’s fire on all sides, all around us,” said Jeremy Remington, as he stood on a beach surrounded by fire in the Mammoth Pool Reservoir in a video posted on Twitter. Remington was later airlifted to safety, local news reported.

The blaze was still out of control late on Sunday, while nearly 15,000 firefighters were battling two dozen fires across the state, according to the California Department of Forestry and Fire Protection (Cal Fire).

California Governor Gavin Newsom declared a state of emergency in the Fresno, Madera, Mariposa, San Bernardino and San Diego counties due to the wildfires.

His office said that the declaration was prompted by the Creek Fire.

Eight people have been killed and some 3,300 structures have been destroyed over the past three weeks in wildfires across the state.

The San Diego County Sheriff’s Department issued a voluntary evacuation order on Sunday afternoon as the 2,165-square-hectare Valley Fire raged unchecked on the eastern edge of the metropolitan area of more than 3 million people.

“The sky is so thick by my house; the sky is a dirty brown cloud and I live about 25 minutes to the west of the fire,” Twitter user Cris Mel said in a post.

“It’s kind of a struggle to breathe.”

A dangerous heat wave was baking swaths of the western United States through the weekend, and many locations in California registered record-high temperatures on Sunday.

The temperature reached 49 degrees Celsius on Sunday afternoon in Los Angeles County, a record for the National Weather Service office that covers the metropolitan area.

“This is an historic heatwave for southwestern CA and one that will be remembered for a long time,” the service said.

State officials on Sunday repeated calls to Californians to turn off appliances and lights to help avoid blackouts from an overwhelmed power grid.

Southern California Edison Co, which services 5 million customer accounts in the region, was advising customers of potential rotating outages between 4pm and 9am on Sunday.

A firework at a gender reveal party triggered a wildfire in southern California that has destroyed 2,800 hectares and forced many residents to flee their homes.

Gender reveal parties are held during pregnancy to unveil the sex of the expected child, sometimes announced by pink or blue smoke fireworks.

Residents of several communities in the area have been ordered to evacuate.

“Those responsible for starting fires due to negligence or illegal activity can be held financially and criminally responsible,” it warned.