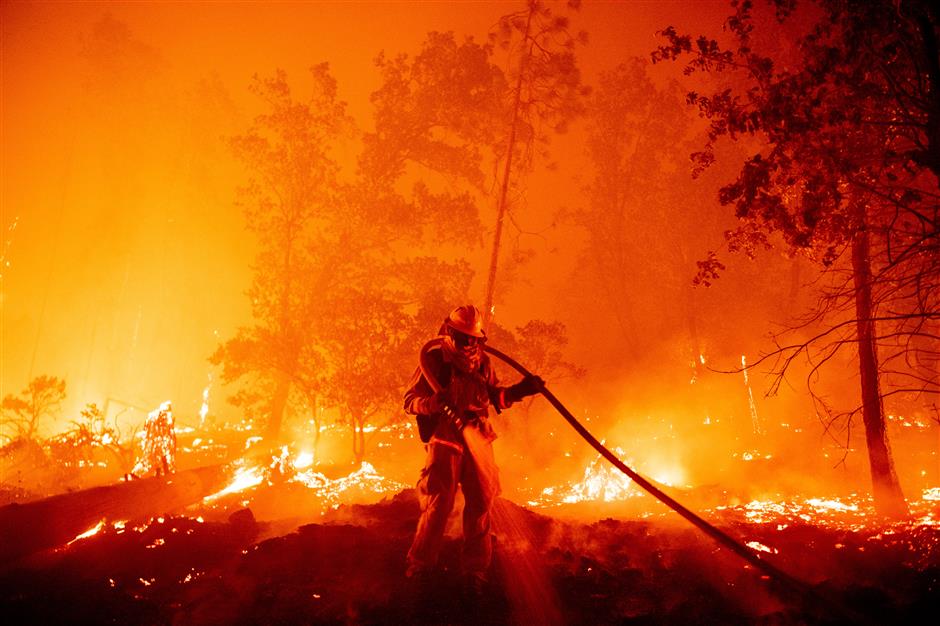 A firefighter douses flames as they push toward homes during the Creek Fire in the Cascadel Woods area of Madera County, California, on Monday.

Wildfires in California have torched a record more than 2 million acres (800,000 hectares) the state fire department said on Monday, as smoke hampered efforts to airlift dozens of people trapped by an uncontrolled blaze.

The Creek Fire in northern California has so far spread to 135,525 acres, destroyed 65 structures and is out of control, California Department of Forestry and Fire Protection (Cal Fire) said.

Several communities in the area northeast of Fresno have been ordered to evacuate due to immediate threat to life.

Dozens of people have been trapped by the rapidly expanding fire, and Fresno Fire Battalion chief Tony Escobedo said smoke was hampering efforts by military choppers to rescue them.

“The difficulty of the helicopters trying to get through the smoke has proven a challenge during the day,” he told reporters on Monday night.

“They weren’t able to land several times, several attempts throughout the day,” he said.

“We are going to try to do it again this evening with their night vision capability. We have reports in excess of 50 people or more (trapped in several locations),” he said.

Fresno Fire Department tweeted that “military pilots tried valiantly to land but heavy smoke conditions prevented a safe approach, another effort will be made shortly to evacuate the trapped people in Lake Edison and China Peak using night vision.”

Over the weekend, military helicopters rescued more than 200 people trapped by the fire near Mammoth Pool Reservoir.

The region has seen many major fires in recent years but Sierra National Forest forest supervisor Dean Gould said at the briefing Monday night that Creek Fire was likely the most aggressive and “is in a class by itself.”

The fire department said 976 personnel were battling the blaze, which had continued to grow “under extreme conditions.”

The record 2 million acres destroyed was hit as the wildfire season still has roughly two months to go in the most populous US state and as thousands of firefighters were battling flames during a scorching heatwave.

“In the past 33 years we have not seen a single year go over two million acres until this year,” said Cal Fire spokeswoman Lynne Tolmachoff.

“This is definitely record-breaking and we have not even come close to the end of fire season yet.”

At least seven people have died as a result of this year’s fires and some 3,800 structures have been damaged.