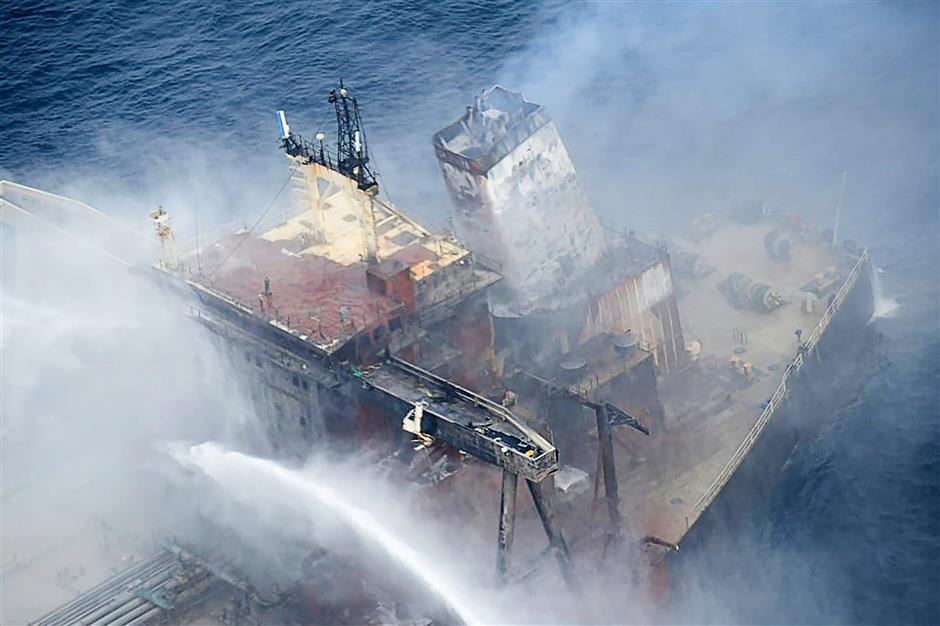 This handout photograph taken on Tuesday, and released by Sri Lanka’s Air Force shows fireboats battling to extinguish a fire on the Panamanian-registered crude oil tanker New Diamond, some 60kms off Sri Lanka’s eastern coast where a fire was reported inside the engine room.

Ships and aircraft from Sri Lanka and India intensified efforts to extinguish a new fire on an oil tanker off Sri Lanka’s coast on Tuesday, two days after the previous three-day blaze was doused.

The MT New Diamond is carrying nearly 2 million barrels of crude oil and Sri Lankan officials have warned of possible massive environmental damage if the ship leaks or explodes. The navy had said the initial fire began in an engine room boiler but did not spread to the tanker’s oil storage area and no leak had been reported.

Navy spokesman Captain Indika de Silva said the new fire started Monday evening and firefighting efforts were enhanced. “The new fire reached up to the previous level, but it has now been contained, but flames are still there,” de Silva added.

Ships, tugboats and helicopters from Sri Lanka and neighboring India were part of the firefighting efforts.

The fire initially killed one Filipino crew member and injured another, but the rest escaped uninjured. The tanker had 23 crew.

It had drifted to within 37 kilometers of Sri Lanka’s eastern coast before a tugboat towed it farther out to sea. The navy said it is now positioned about 30 nautical miles off the coast.

The new fire started as the government was planning to send scientists to determine whether the fire has damaged the marine environment.

State scientists and universities will prepare a risk assessment, including the potential for an oil leak, said Terney Pradeep, general manager of Sri Lanka’s Marine Environment Protection Authority. The authority has said it plans to take legal action over the fire.

Ten British and Dutch professionals, including rescue operation specialists, disaster evaluators and legal consultants, reached the scene and were waiting to board the tanker to begin a salvage mission.