US towns destroyed as firefighters battle wildfires under orange skies 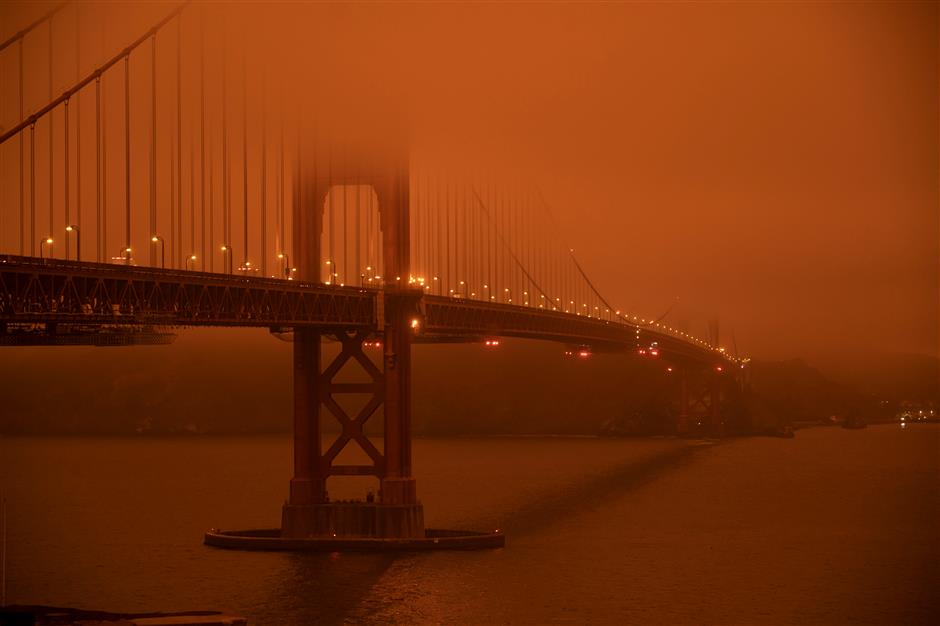 Cars drive along the San Francisco Bay Bridge under an orange smoke filled sky at midday in San Francisco, California, on September 9.

Hundreds of homes including entire communities were razed by wildfires in the western United States on Wednesday as officials warned of potential mass deaths under apocalyptic orange skies.

"I want to be upfront in saying that we expect to see a great deal of loss, both in structures and in human lives," she told a press conference.

"This could be the greatest loss of human lives and property due to wildfire in our state's history."

Along with neighboring California and Washington, Oregon has been scrambling to contain rapidly spreading wildfires since the weekend due to unprecedented heatwaves followed by intense, dry winds.

Two deaths were confirmed in the Santiam Canyon region 60 miles south of Portland.

"They are not going to be the only folks that we find deceased up there," said Marion County sheriff Joe Kast.

Jody Evans, a resident of Detroit — one of the five towns devastated in Oregon — fled her home as the fire approached.

"Coming through fire on both sides, trees down, wind blowing, ash flying," Evans told Newschannel 21. "It was like driving through hell."

Officials said further deaths would likely be reported in the next two days.

"Quite frankly, we are not able to even get into some of these areas," said Mariana Ruiz-Temple, chief deputy state fire marshal.

In California, where at least eight deaths have been reported, people in the San Francisco Bay Area awoke to a deep orange sky caused by wildfire smoke that at times blocked out sunlight entirely.

Photos of the eerie scene, particularly of a San Francisco skyline fit for a dystopian science fiction film, spread quickly on social media.

"We know the smoke, darkness, and orange glow is scary. Stay calm and try to stay indoors," tweeted the fire department.

Cars crossing the famous Golden Gate Bridge were forced to switch their lights on throughout the day.

Around 150 miles to the north, the Bear Fire exploded at an unprecedented speed overnight, combining with older blazes to scorch over 250,000 acres and threaten the city of Oroville.

Evacuation warnings were expanded to parts of the town of Paradise, site of California's deadliest modern fire which killed 86 people less than two years ago.

The nearby August Complex Fire also spread rapidly to become the state's second-largest blaze in history, at 420,000 acres.

At the Creek Fire in central California, exhausted firefighters raced between blazes as thick columns of smoke rose up from the Sierra forest — now closed, along with all 18 of the state's national forests.

In one home near Shaver Lake, only the scorched remains of a washing machine, outdoor dining table and chairs were left standing beside the ash-coated chassis of a pickup truck, according to an AFP reporter.

Tens of thousands of people have been forced to evacuate homes across the region.

In Washington, where the town of Malden was decimated, governor Jay Inslee described the wildfires as "unprecedented and heartbreaking."

Inslee, who campaigned for the Democratic nomination for president on a platform of battling climate change, and California Governor Gavin Newsom both blamed the effects of a changing climate for the exceptional ferocity of this year's blazes.

"I quite literally have no patience for climate change deniers," Newsom said. "It's completely inconsistent, that point of view, with the reality on the ground."

As for Inslee, he said that "we're living in a new world — this is not the old Washington.

He added: "The devastation is all over our state."

In California, the process began of restoring power to more than 170,000 people left without electricity a day earlier after utility company PG&E enacted a "last resort" shutoff.

More than 14,000 firefighters are fighting 28 major wildfires across the country's most populous state.